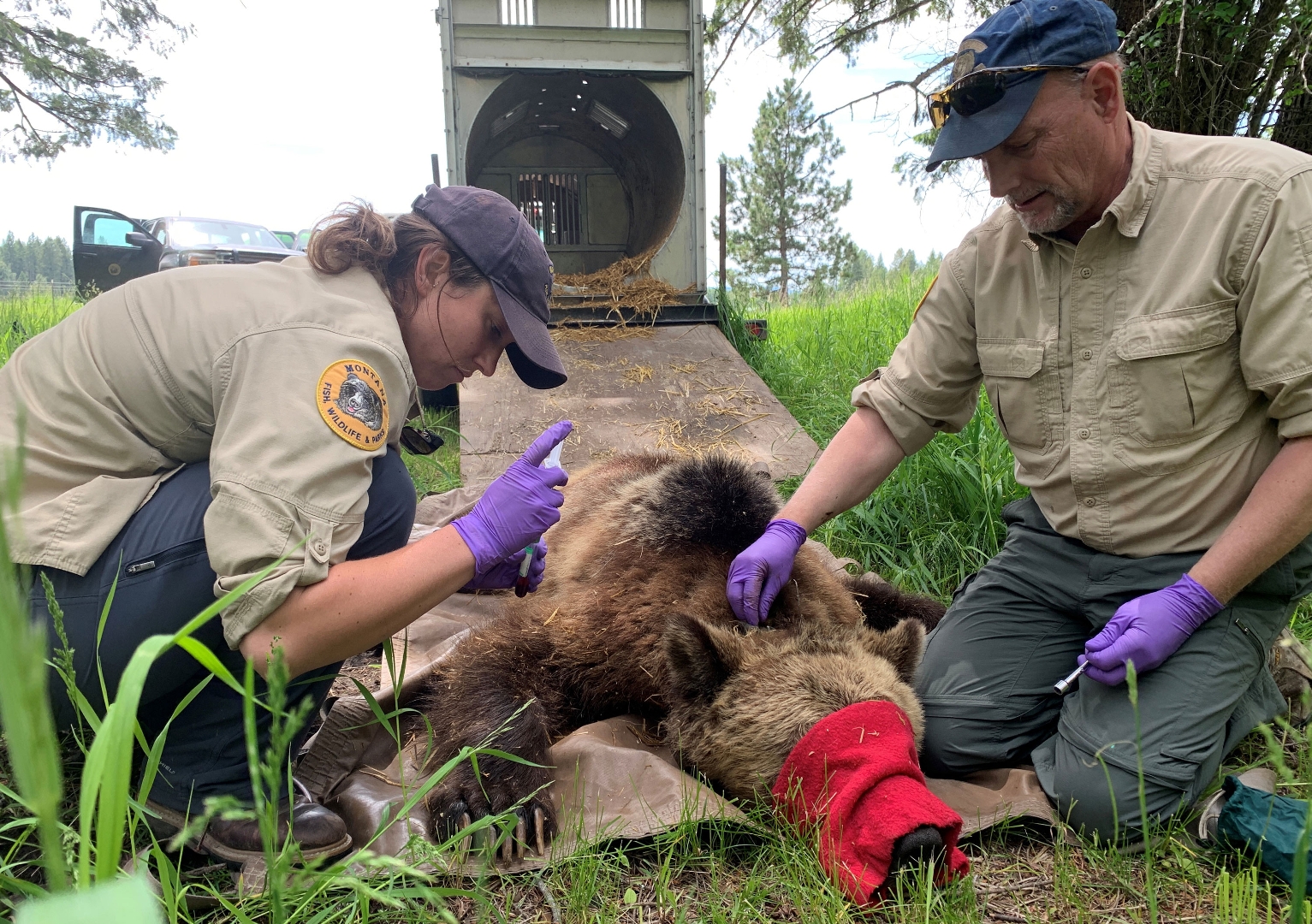 Grizzly bears in Montana are an iconic native species with high value to people and cultures across the state and around the world and play important roles in Montana ecosystems and economies. At the same time, they can and do injure or kill people and livestock and cause property damage and economic loss, which may disproportionately affect individuals living and working in bear country. Their potential presence is both valued and feared.

Grizzly bears historically occupied most of Montana, as described in the journals of Lewis and Clark. By the 1930s, the population in the Northern Rockies dipped below an estimated 300 bears, most of which lived in Montana near Glacier and Yellowstone national parks. In 1975, the U.S. Fish and Wildlife Service listed the grizzly bear in the lower 48 states as a threatened species under the federal Endangered Species Act. Recovery efforts have been underway since, following a federal recovery plan.

Currently, all grizzly bears in the lower 48 states remain federally protected as threatened. 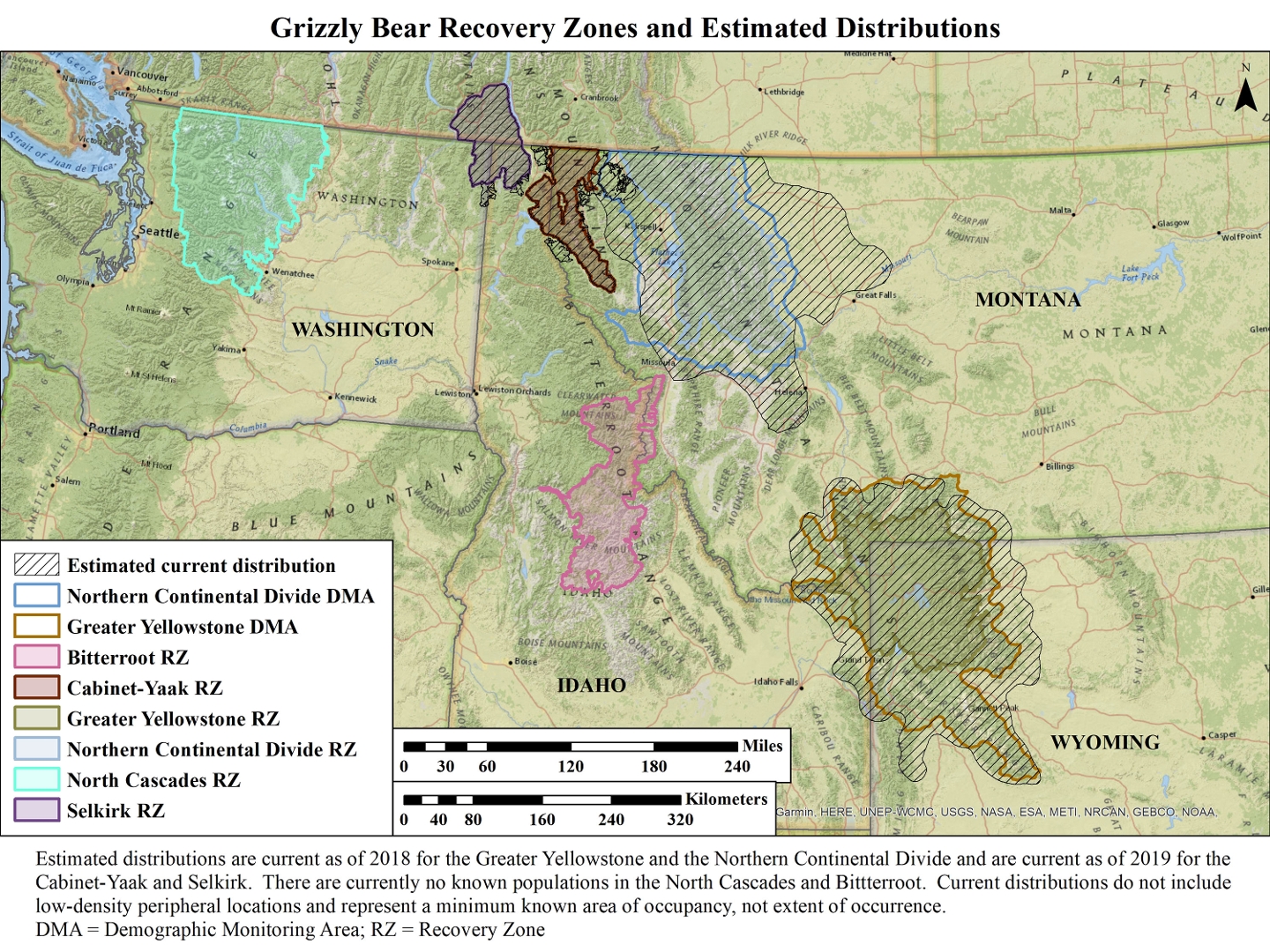 A recovery plan for grizzly bears identified six recovery areas, or ecosystems, in the lower 48 states. These recovery zones were identified in the Grizzly Bear Recovery Plan and thought to support grizzly bears at the time of listing.

Four zones are partially or completely within Montana:

After decades of hard work by all Montanans, grizzly bear populations have reached and surpassed federal recovery goals in the Greater Yellowstone and Northern Continental Divide ecosystems. The number of grizzly bears in and around these two ecosystems has continued to increase slowly. Populations are expanding into areas where they have not been for decades, including connectivity areas between recovery zones. These areas include a greater percentage of working private lands and places where the human population is expanding, creating a greater potential for conflicts.

Montana Fish, Wildlife & Parks has management plans for grizzly bears in various parts of the state to ensure the future success of conservation. These plans were developed to address the increase in number and distribution of bears in and around the Northern Continental Divide, the Greater Yellowstone, the Cabinet-Yaak, and the Bitterroot, as well as surrounding areas.

Although grizzly bears in the lower 48 states remain under the jurisdiction of the U.S. Fish and Wildlife Service, much of the day-to-day management in Montana is done by FWP and Tribes within the bounds of what listing allows.

Montana Fish, Wildlife & Parks specialists work across the state and respond to human-bear conflicts, collaborate with landowners, and conduct education and outreach to promote safety and conflict prevention. These annual reports summarize their work in the field.

Note: Information on management response and conflicts in the Greater Yellowstone Ecosystem is contained in the Interagency Grizzly Bear Study Team reports.

Grizzly bear conflict response is primarily conducted by state wildlife agencies, Tribes, and USDA Wildlife Services. These agencies work under the authority of the US Fish & Wildlife Service.

It is illegal to harm, harass, or kill grizzly bears, except in cases of self defense or the defense of others.

Who do you call to report a conflict?

Preventing a conflict is easier than dealing with one

Montana Fish, Wildlife & Parks, in cooperation with other state and federal agencies, initiated a program in 2004 to monitor the population trend of grizzly bears in NCDE.

The purpose of this long-term program is to monitor the vital population parameters of grizzly bears by assessing the survival and reproductive rates, and trend. This will be accomplished by radio-monitoring female grizzly bears.

This research works allows FWP biologist to monitor the survival and reproductive rates of female grizzly bears to determine population trend, monitor distribution of bears within and adjacent to the federal recovery zone, and collect information on other pertinent aspects of grizzly bear ecology.

The work of this program is summarized in the annual reports listed below.

The Interagency Grizzly Bear Study Team (IGBST) is an interdisciplinary group of scientists and biologists responsible for long-term monitoring and research efforts on grizzly bears in the Greater Yellowstone Ecosystem.

The U.S. Fish and Wildlife Service is responsible for the research and monitoring of the Cabinet-Yaak ecosystem population.

The Interagency Grizzly Bear Committee (IGBC) was formed in 1983 to help ensure recovery of viable grizzly bear populations and their habitat in the lower 48 states through interagency coordination of policy, planning, management, and research. 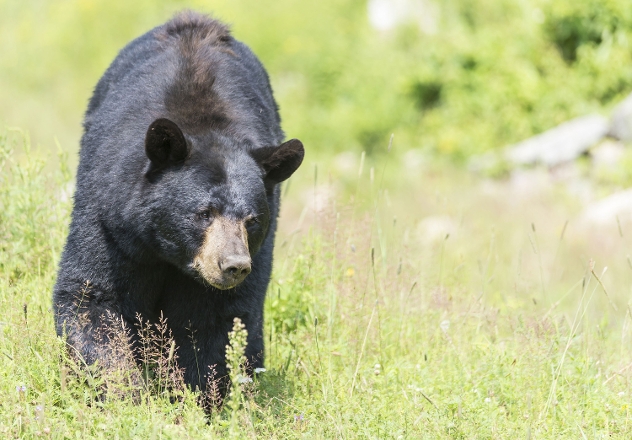 The historic range of black bears (Ursus americanus) includes most of the forested habitats of North America and the black bear occupies suitable forested areas in Montana.

FWP Bear Specialists are busy from summer through fall managing Montana's grizzly bears. Here’s an inside look at what they deal with on a regular basis.