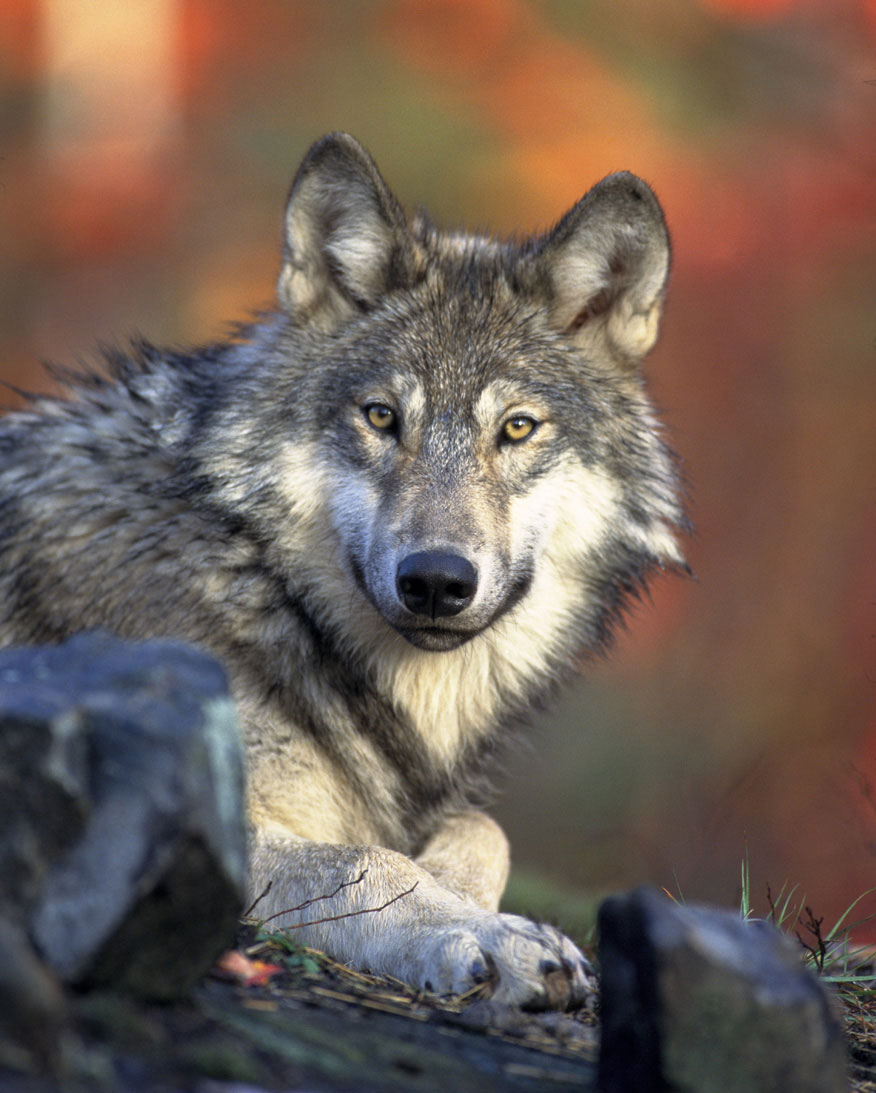 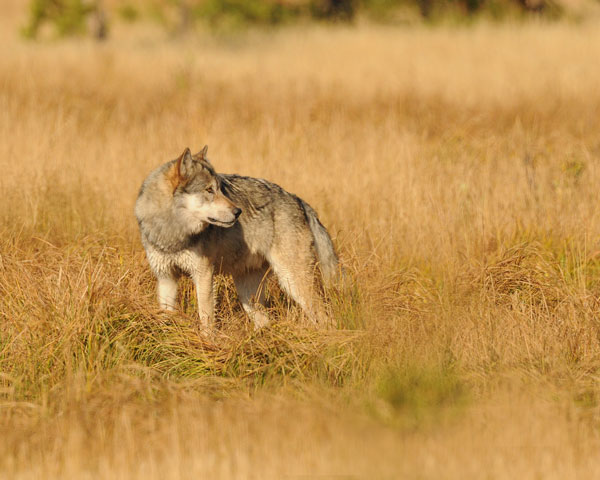 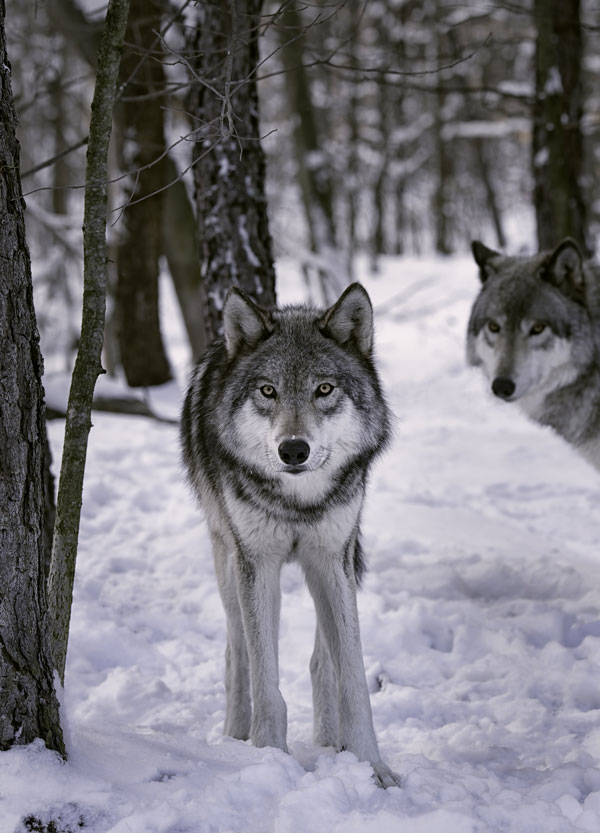 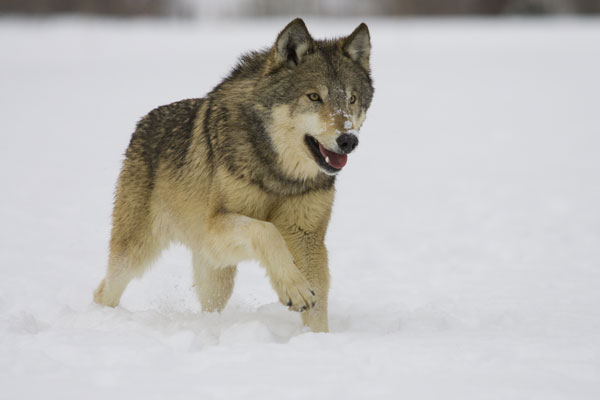 The gray wolf is a native species that plays an important role in Montana's wildlife heritage.

Montana Fish, Wildlife & Parks obtained full authority to manage wolves throughout the state upon the federal delisting of the Rocky Mountain gray wolf in May 2011. FWP is committed to ensuring the long-term survival of wolves while responsibly managing the population and addressing conflicts with livestock. FWP is also committed to involving hunters and trappers in the sustainable management of the species.

Annual reports present information on the status, distribution, and management of wolves in Montana.

FWP is managing wolves in Montana in compliance with federal law and the state conservation and management plan.

The wolf (Canis lupus) is the largest wild member of the dog family Canidae.

Wolves are highly social animals that live in groups, called packs. The average wolf pack in Montana has 6 to 8 animals. Packs typically include a breeding pair, their offspring, and other non-breeding adults.

Wolves are capable of breeding at 2 to 3 years of age. On average, four to five pups are born in early spring.

Wolf packs occur primarily in western Montana, but wolves could be found anywhere in Montana. Gray wolves are built for travel with narrow bodies, long legs and large feet. Wolf packs live within territories, which they defend from other wolves. They can easily cover 10-20 miles in a day within their territory, which is approximately 150 square miles. In the Northern Rocky Mountains, lone dispersing wolves travel on average 60-70 miles, but have traveled as far as 600 miles in search of a mate or territory.

Wolves in Montana can be a light gray, dark gray, black or even white as they approach old age. Full grown wolves are about 2.5 feet tall and 6 feet long. An average male will weigh 80-110 pounds. Females are slightly smaller, usually 75-90 pounds.

Wolves are carnivores at the top of the ecological pyramid. They seek large, vulnerable ungulates, such as deer, elk, and moose, as well as smaller mammals, such as beavers, rodents, and hares.

Wolf tracks are about 5 inches long by about 4 inches wide, with 4 toes and claws in an oval shape. Wolf scat ranges from a half to one and half inches in diameter, but is usually greater than an inch.

The gray wolf was extirpated from the western United States during the 1900s, primarily due to loss of habitat and conflicts with people.

Although wolf packs were eliminated from Montana by the 1930s, tracks, scat, and/or observations of large canid-like animals were either reported or those animals were killed up until the 1970s. Most are thought to have been dispersers from Canada and little to no successful breeding activity was evidenced or sustained consistently through time.

The U.S. Fish and Wildlife Service listed the northern Rocky Mountain gray wolf as endangered under the Endangered Species Act in 1973.

In 1980, the Northern Rocky Mountain Wolf Recovery Team completed a plan that would guide wolf recovery efforts for a future wolf population in the northern Rockies of Montana, Idaho, and Wyoming. The recovery plan was revised in 1987. The plan designated three recovery areas - Northwestern Montana, Central Idaho, and the Greater Yellowstone - each of which included some portion of Montana.

Wolves from Canada began to naturally colonize the Glacier National Park area in 1979, and the first wolf den in the western U.S. in over 50 years was documented there in 1986. The wolf population in northwest Montana grew as a result of natural reproduction and dispersal. By the end of 1994, there were about 48 wolves in and around Glacier National Park.

In 1995, three family groups (a total of 14 wolves) were captured near Alberta's Jasper National Park, transported to Yellowstone National Park, and placed in acclimation pens. Two of the females subsequently denned and produced nine pups in Montana.

Also in the winter of 1995, 15 wolves were reintroduced into the wilderness areas of central Idaho. These animals moved widely throughout central Idaho and beyond. Many of these wolves moved north, some to the upper Bitterroot Valley. In 1996, three packs produced 11 pups.

In the winter of 1996, 17 wolves were captured near Fort St. Johns, British Columbia, Canada and were again released into acclimation pens in Yellowstone National Park. Twenty wolves were released in central Idaho. These translocated wolves were the same subspecies that existed in the northern Rocky Mountains historically.

Wolves were not released within Montana, but wolf populations in Yellowstone National Park and central Idaho grew rapidly and soon became a source for dispersers to Montana. New packs formed outside the earliest core wolf areas and overall wolf distribution expanded. Wolf dispersal has been documented between and among all three federal recovery areas and the states comprising the northern Rockies.

Wolf populations in the Northern Rocky Mountains continued to expand and reached recovery goals. With the exception of Wyoming, they were delisted in 2011, giving management authority to the states. The five-year federal oversight period for Idaho and Montana ended in 2015 and wolf populations remained well above minimum federal management objectives of 15 breeding pairs and 150 wolves in each state.

While Montana has full authority to manage wolves in the state, federal regulations continue to guide management practices. To remain in compliance with federal law, FWP’s conservation and management program aims to maintain the overall population high enough to prevent its reclassification as "threatened" or "endangered" under the Endangered Species Act.

Landowners or their agents may take up to 100 wolves a year that potentially threaten livestock, domestic dogs or human safety (MCA 87-1-901).

The quota will be examined in four 25-wolf increments. The Montana Fish & Wildlife Commission must approve the next increment toward the 100-wolf quota.

The Montana Livestock Loss Board was established by the legislature in 2007 to address economic losses due to wolf predation and to create incentives for producers to take proactive, preventative steps to decrease the risk of loss.

The Wildlife Services program in Montana helps citizens, organizations, industries, and Government agencies resolve conflicts with wildlife to protect agriculture, other property, and natural resources, and to safeguard human health and safety.

Montana established an extensive, citizen-oriented process to develop its conservation and management plan from 2000-2003.

The Montana Wolf Conservation and Management Plan is based on the work of a citizens advisory council.

The foundations of the plan are:

Montana has a cooperative agreement with the U.S. Fish and Wildlife Service to maintain the overall population high enough to prevent its reclassification as threatened or endangered under the Endangered Species Act. This commits Montana to maintaining minimum federal management objectives of 15 breeding pairs and 150 wolves in the state.

Beginning with delisting in 2011, Montana's laws, administrative rules, and state plan guide management and conservation of gray wolves, which are classified as a "Species in Need of Management" in the state. 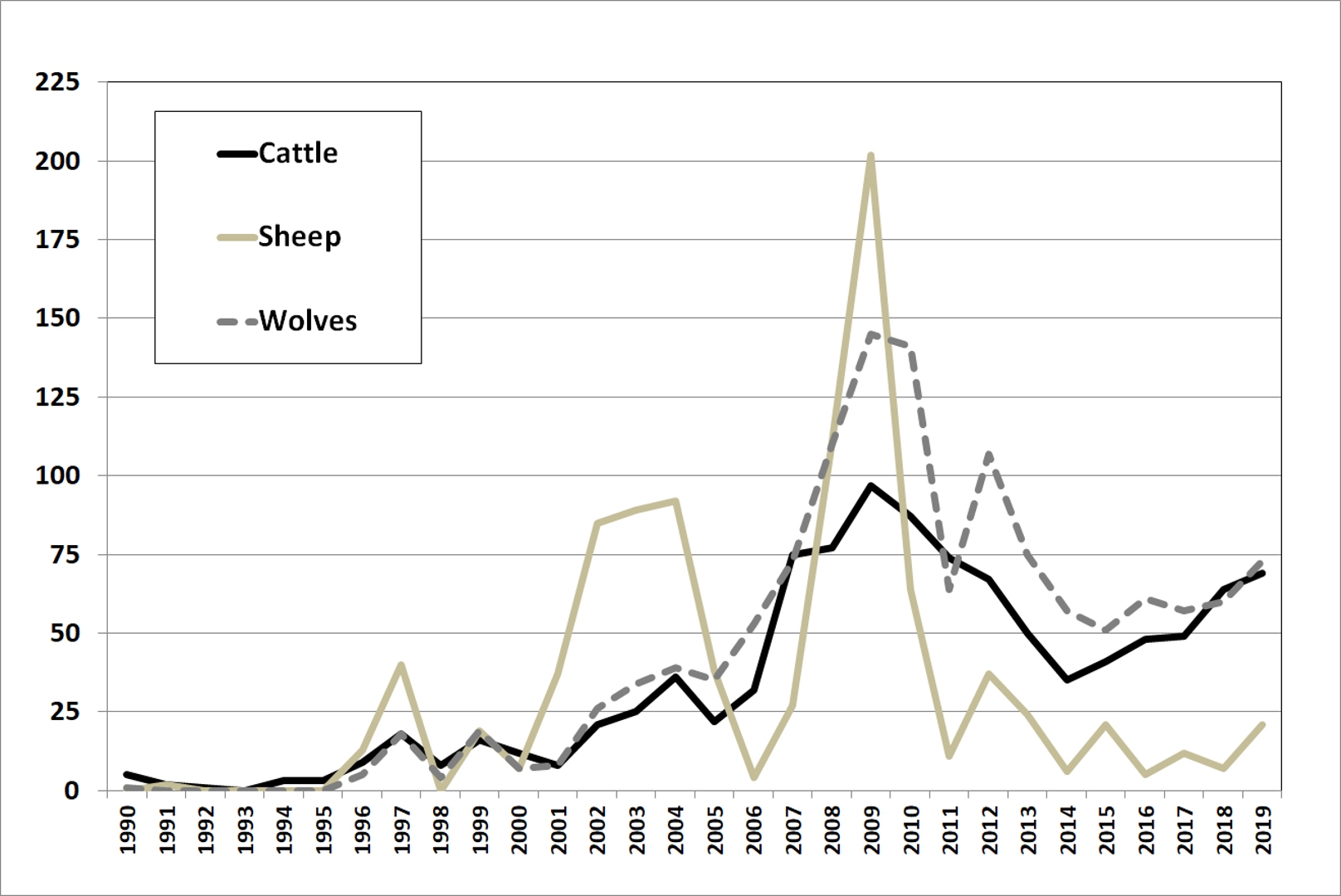 To view the current status of the wolf harvest, click here.

Gray wolves are classified as a "Species in Need of Management" in the state. Montana maintains sustainable hunting and trapping opportunities for wolves that follow the commitments outlined in the state's conservation and management plan.

Before setting a wolf trap in Montana, a person must successfully complete either a Montana FWP or Idaho offered trapper education and certification course.

The Montana wolf trapper education and certification courses are free and open to individuals age 11 and older. 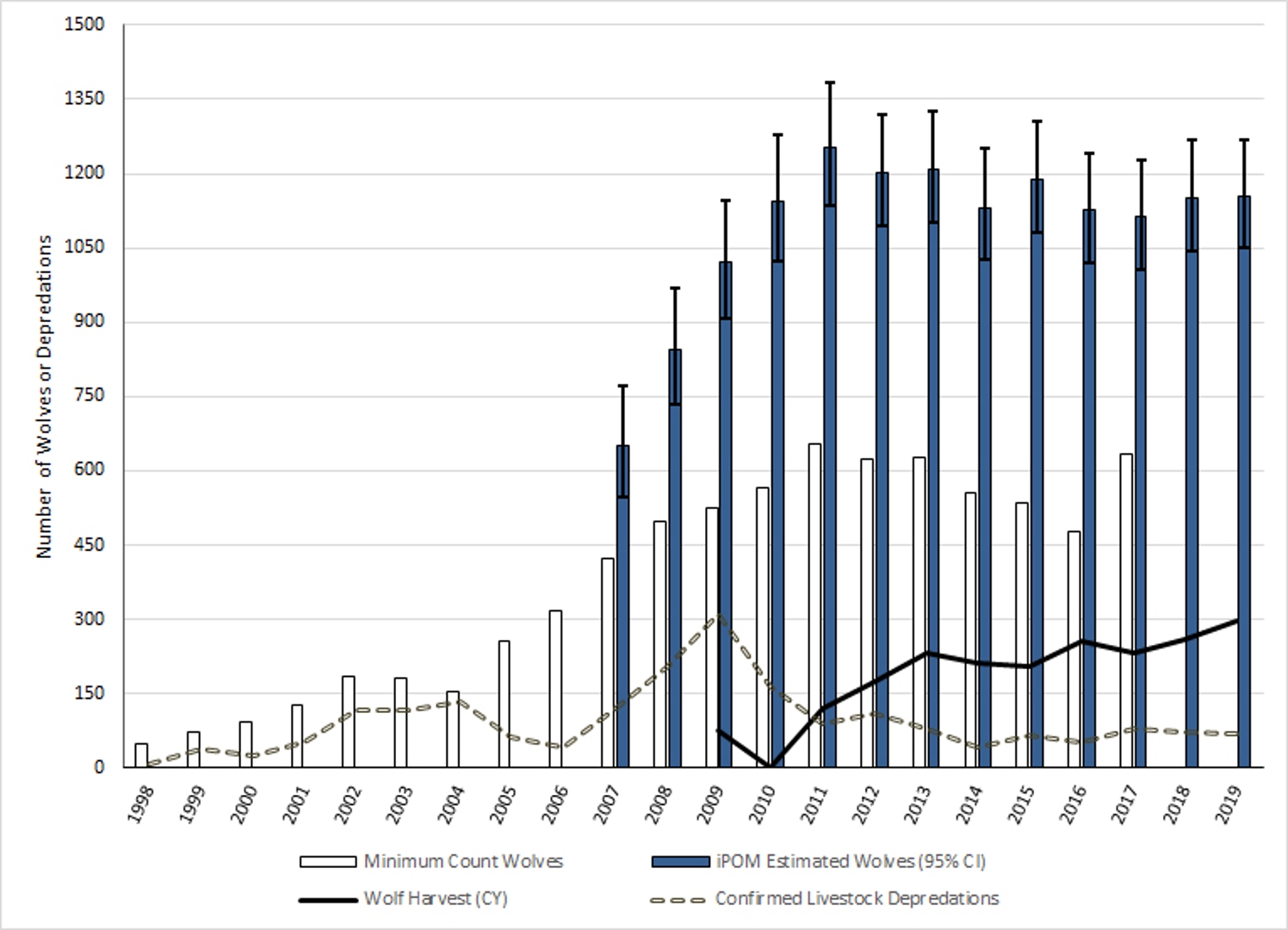