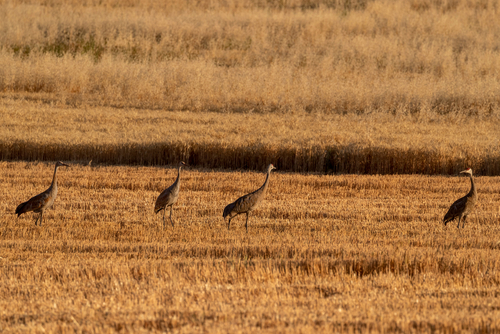 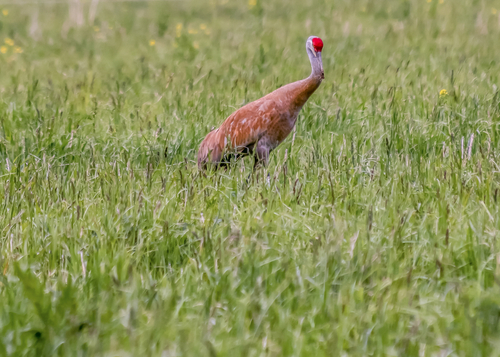 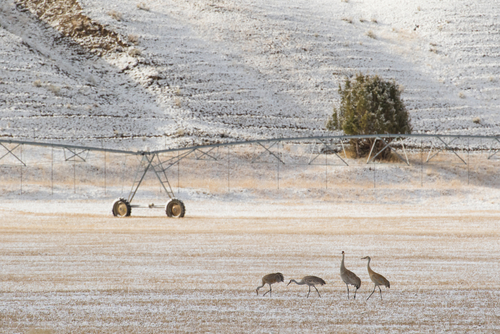 For several years FWP biologists have been deploying radio transmitters on Rocky Mountain Population sandhill cranes. This research led by Pacific Flyway biologists from the US Fish and Wildlife Service and the Intermountain Joint Ventures focuses on sandhill crane movement, seasonal habitat use, overwinter survival, and migration paths in the Intermountain West. FWP, in addition to state biologists from UT, WY, CO, and ID have all participated in this extensive effort.

This research involves working closely with private landowners to identify daytime foraging areas and nighttime roosting sites, with capture occurring during the dark phase of the moon in mid-late July and August. Birds are captured by spotlighting and a net. After capture, birds are implemented with a solar powered GSM/GPS leg harness transmitter which sends signals directly to the cell phone tower to be downloaded. To date cranes from the Paradise valley, Ruby valley, and Big Timber area have been captured on nesting territories and have showed migration routes back and forth to wintering grounds at Bosque del Apache National Wildlife Refuge, south of Albuquerque, New Mexico. The birds stop at important staging areas in the San Luis Valley in Colorado on their way. Numerous other cranes captured at the wintering grounds also utilize Montana as an important nesting area. This work has further highlighted the importance of wetland and grassland habitats for year-round use by cranes.

Check out this 856-mile journey of one crane as it flew from southwest Montana to New Mexico.

In 2019, FWP worked with colleagues from the U.S. Fish & Wildlife Service and the Iowa Department of Natural Resources to capture sandhill cranes in the Paradise and Ruby valleys. Each crane was fitted with a GPS tracker. This collaborative project has yielded insightful data on migration pathways and habitat use along the Pacific Flyway.

Take a look at sandhill crane H26's journey from the Ruby Valley to Albuquerque, N.M. (each blue dot represents a spacial point in time for this bird).