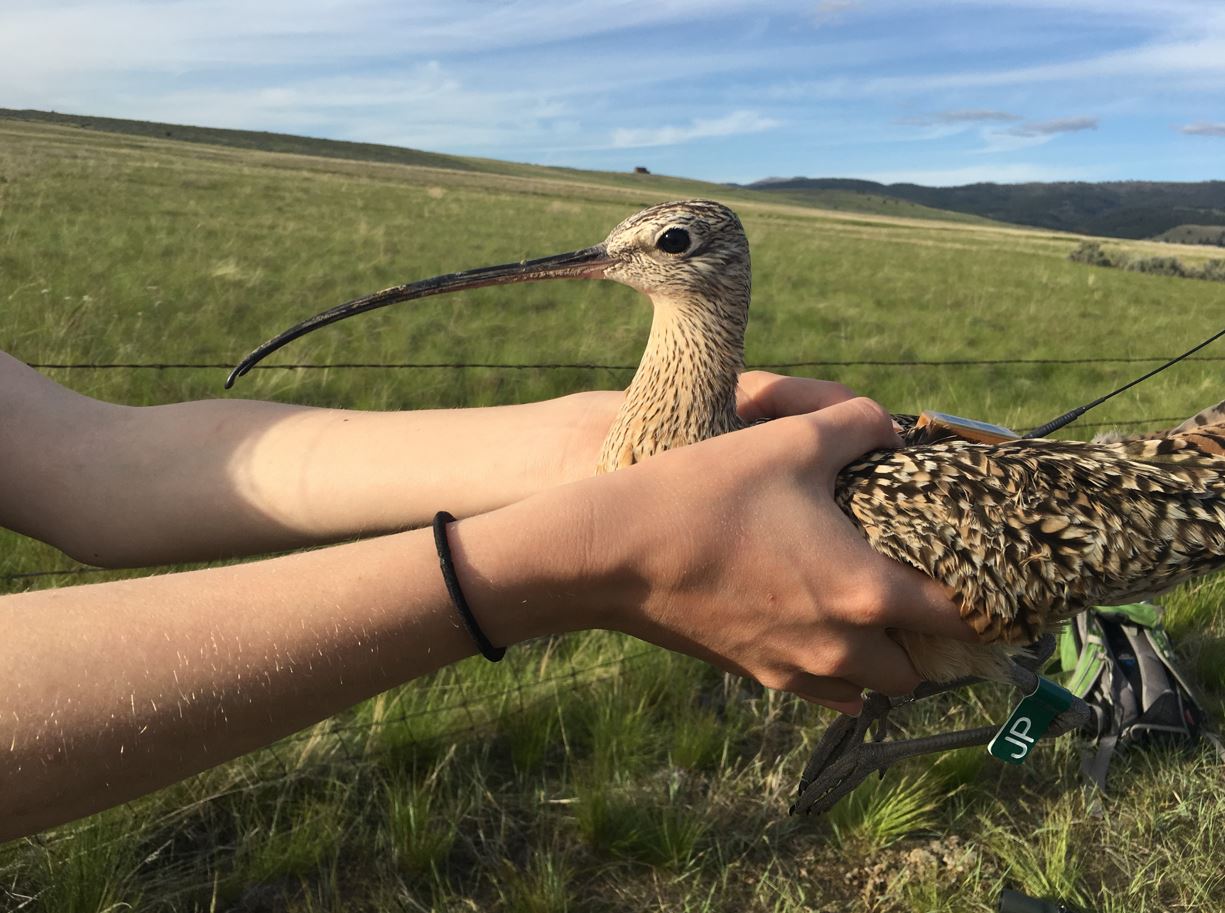 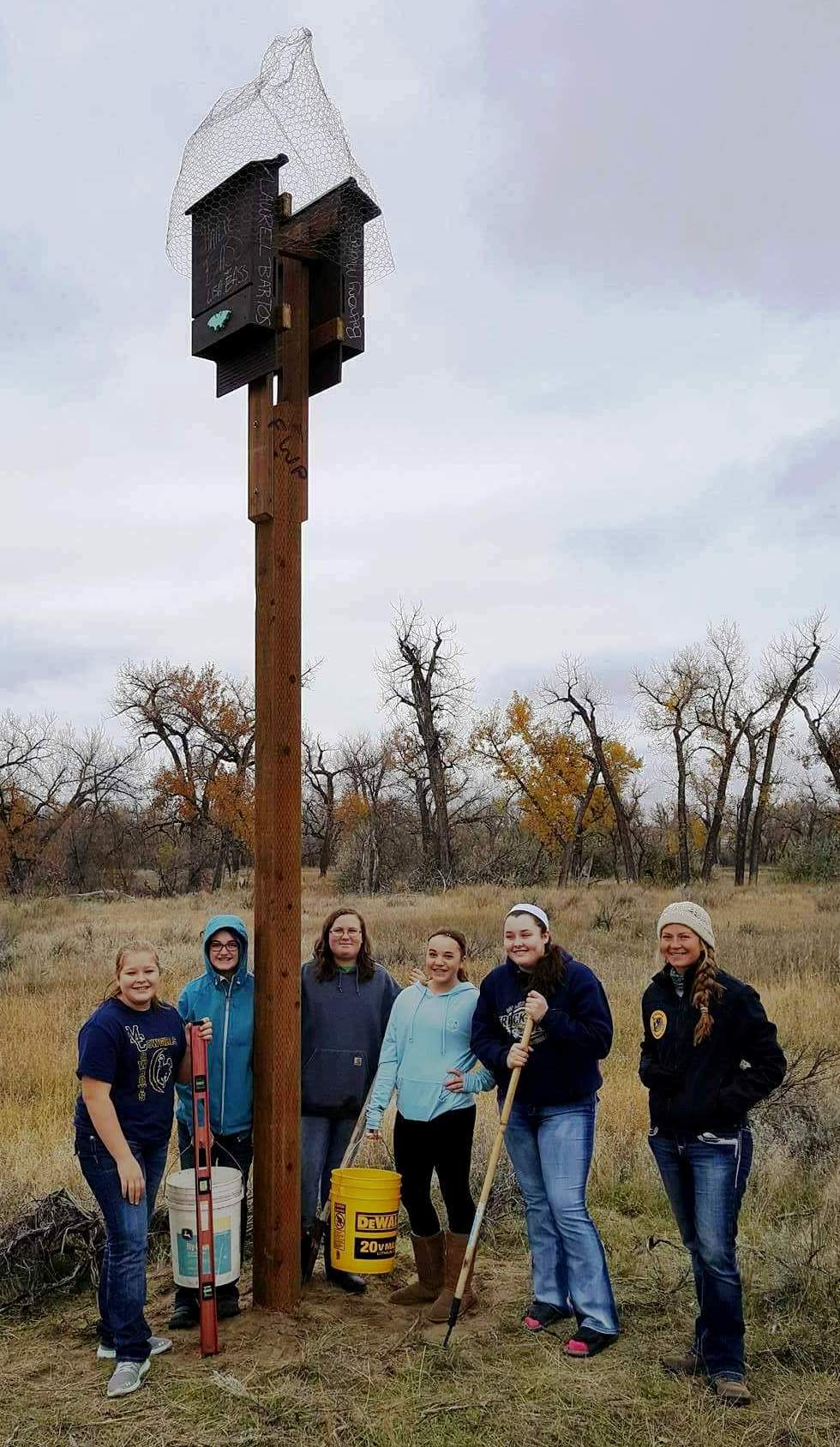 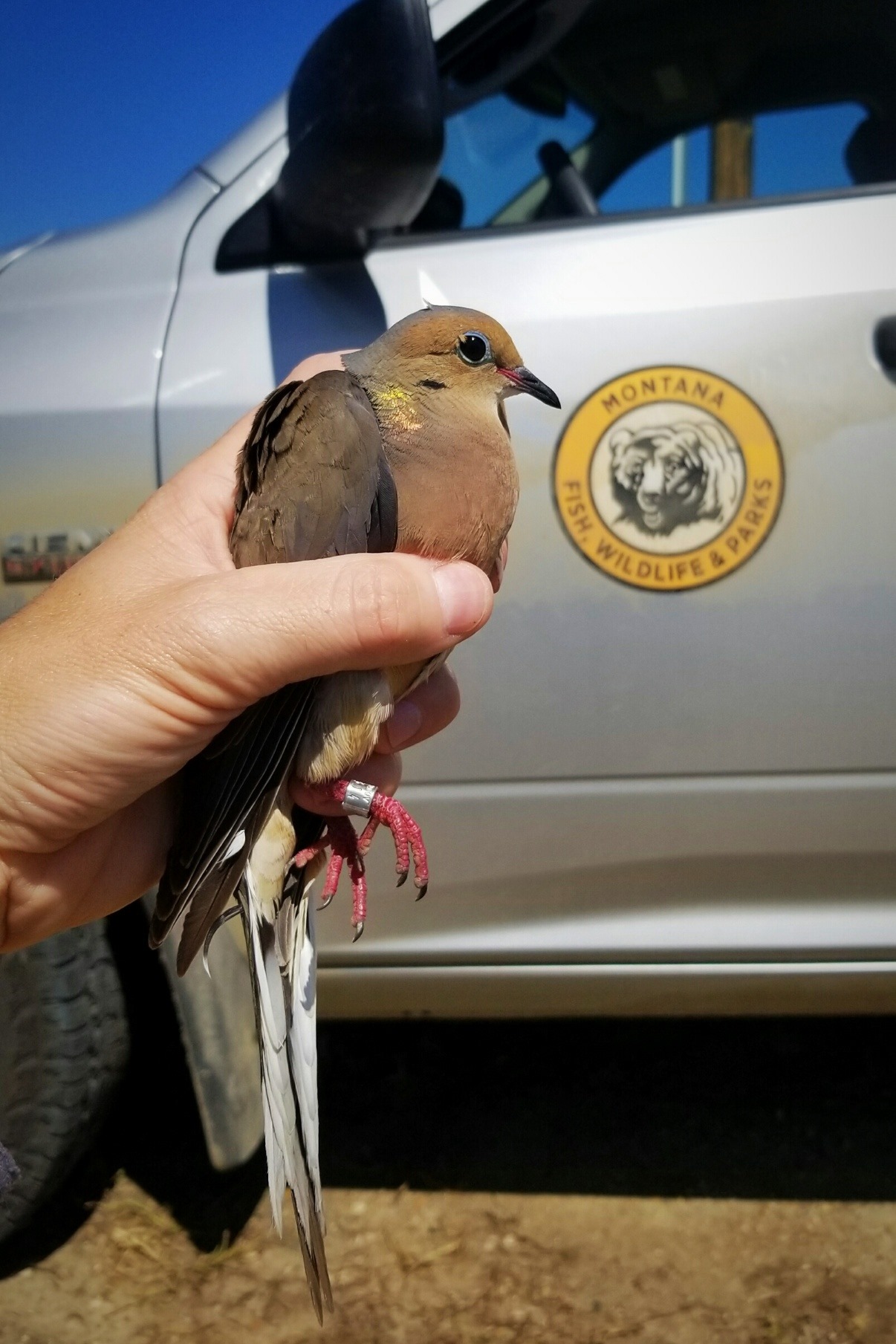 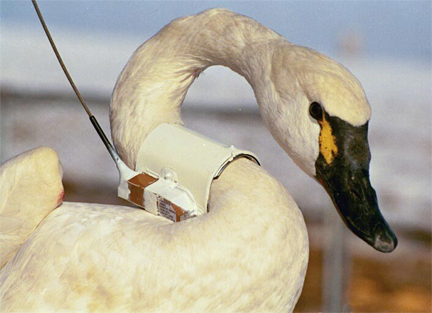 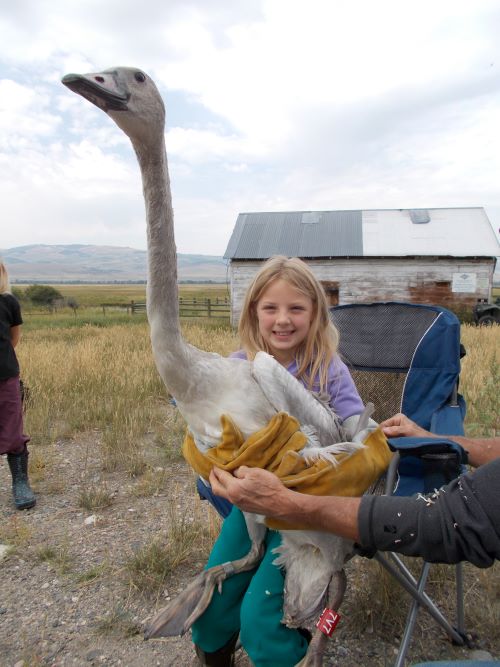 Studies of bird and bat migration rely on capturing a sample of animals from a given population to deploy radio tracking devices.

A thin mesh net strung between poles is often the preferred method for capturing birds or bats. The birds or bats become entangled in the net until removed by the researcher. Individual birds can be targeted for capture by using cage traps set over a nest. Large birds like eagles are commonly captured with rocket nets or other types of net traps that are triggered when the bird is eating on a carcass or has landed on some sort of lure. Because bird and bat captures can occur on private lands, landowner permissions are a key component of any capture effort.

Once the bird or bat is in hand, measurements or samples are collected to determine body condition, age, sex, and sometimes species. Birds are checked for brood patches, a bare section of skin on the belly, which indicate the bird is incubating eggs. Certain bat species can only be differentiated from others by specific measurements of wings or ears. Blood is often collected from birds to look for toxins like lead or to study specific genetic information.

Small birds and bats can only be fitted with small transmitters, often with short battery life or short ranges for detection. However, new technologies are providing transmitters with much greater tracking ability.

Tracking collars and tags are commonly used to monitor wildlife and allow researchers and managers to collect information on wildlife ecology including: home and seasonal ranges; habitat use; species interactions; and movement patterns including migration, behaviors, mortality, and diet. Collar and tag technology has evolved over time, moving from very high frequency (VHF) transmitting devices that emit a pulsed radio signal allowing biologists to track marked individuals, to global positioning system (GPS) devices that store locations in the device for future download. GPS is a navigation system that operates using an array of satellites to identify location, speed, and time data. A GPS device on the ground communicates with all available satellites to produce the device’s location and time. The most recent advancement is satellite GPS devices that collect location data using GPS satellites and then transmit the data to a communication satellite (e.g., Iridium, Argos) that relays the information to a user or online account where it can be downloaded at any time. Some companies offer interactive user interfaces that allow for mapping, downloading, and direct communication with devices via a website. Satellite devices are available for a range of species and can be attached permanently or with a drop-off mechanism that releases the device on command or after a preset period of time (e.g., one year). Additional sensors that detect activity, temperature, and mortality are also available.

GPS data collection can be targeted to answer specific research or management questions by adjusting what time of year data are collected and how frequently locations are recorded. If fine-scale movement data are needed to define migration routes or map calving grounds, then locations can be recorded frequently (e.g., every 30 minutes) during the time of year when those behaviors are most likely to occur. Outside of that time period, locations can be recorded at larger intervals (e.g., four hours) in order to prolong the device battery and extend the length of time they can be deployed on that animal. The battery life of current satellite collars deployed on large ungulates (e.g., elk, deer) allows for hourly locations for three years. Devices deployed on small animals such as birds or bats do not have long battery life as the size of the battery is much smaller. These devices can work for just a few weeks. Larger birds like eagles however can carry devices that collect daily locations and last for multiple years. Many of the bird and bat devices are designed to fall off after a time as they may be glued to the animal or attached with a harness designed to deteriorate over time.

While a GPS device only needs three satellites to identify its location, accuracy is improved with a larger number of satellites. Physical obstructions such as mountains and trees can decrease accuracy by bouncing the signal or limiting the number of satellites a device can communicate with. Collars with a clear view of the sky in open terrain are typically accurate to a few meters. Devices attached to bats can be notoriously difficult to track as these animals often roost in rocks where signals are lost.

Improving technologies have allowed for even the smallest of animals to be radio marked. LifeTag and NanoTag are two types of radio transmitters that can be attached to birds and bats with small harnesses or glue. These tags are part of an automated tracking system known as MOTUS. Motus is Latin for movement, or motion. The MOTUS Wildlife Tracking System is an international collaborative research network that uses a coordinated automated radio telemetry array to track the movement and behavior of small flying animals. Researchers can fit small lightweight radio-transmitters on birds, bats, and large insects such as monarch butterflies. The device signal is detected by receivers scattered around the landscape. Each tag emits a unique signature so researchers can determine where animals go, how fast they move between points (migration ecology), and how long they stay in an area (stop-over ecology). The purpose of MOTUS is to facilitate landscape-scale research and education on the ecology and conservation of migratory animals. One of the central objectives of MOTUS is to enable conservation and ecological research by providing a way to track the movement of animals. 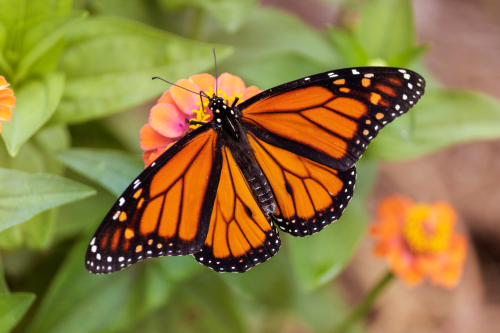 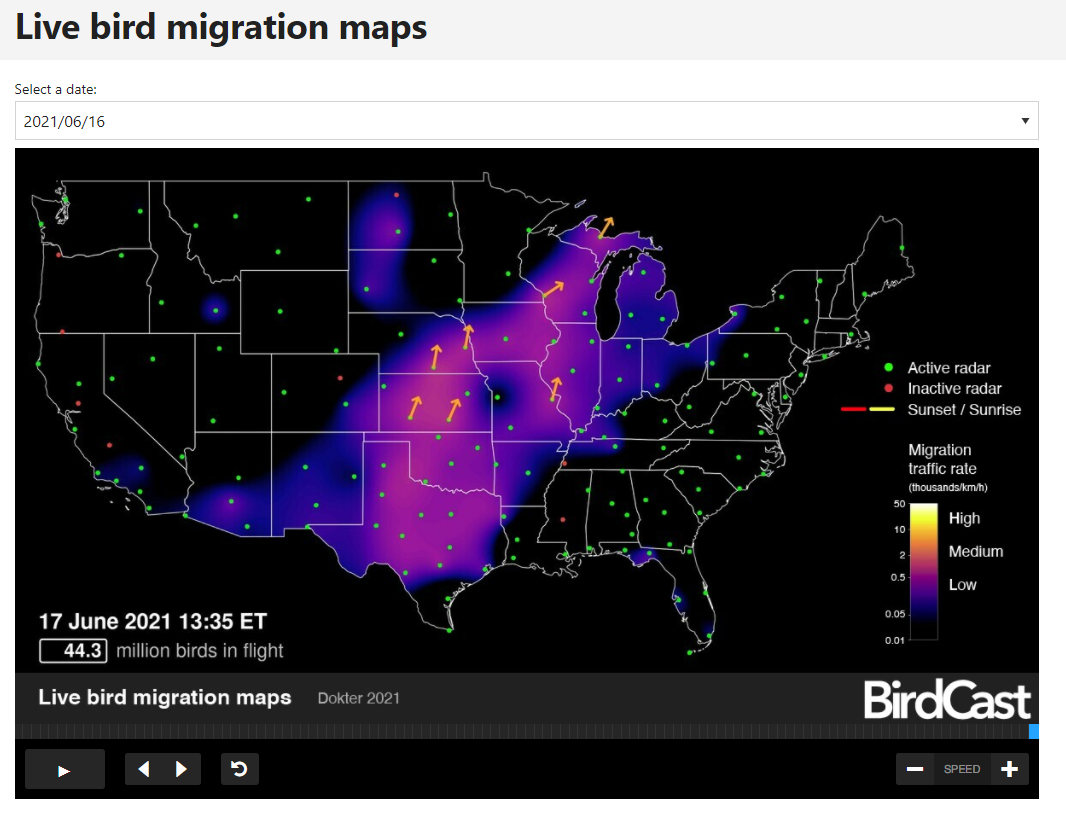