This impact can be significant for rare species and smaller populations. Roads can also pose an obstacle or barrier to wildlife movement. This can make it difficult for wildlife to obtain food, water, shelter, or mates. This is especially a problem for migratory wildlife that travel long distances every year between summer and winter ranges. It can also isolate populations from one another, disrupting gene flow. Roads can also indirectly impact wildlife habitat through increased noise, light, pollution, and fragmentation, decreasing both the quantity and quality of suitable habitat.

FWP is working with the Montana Department of Transportation and other stakeholders to reduce wildlife-vehicle conflicts and conserve wildlife movement and migration across highways.

For more information, visit the Montana Wildlife and Transportation website

The maps below show the movements of a grizzly bear around I-90 and clearly demonstrate the barrier the highway represents. This individual has provided us with the first detailed information about how a grizzly interacts with the interstate.

The bear was estimated to be 4 years old in 2020.  He was captured south of I-90 in Oct 2020 because of conflict at a private residence and he was relocated north of I-90. He quickly headed back south and by November was near the highway again. He stayed in the area and appeared to attempt crossing numerous times. He ultimately left the area and denned up in the Mission Mountains. After emergence in the spring of 2021, he headed south again and finally made it across I-90.  The locations within 500 m of the highway are marked with x's to depict the times he "bounced" off the highway: 29 "bounces" in 26 days during fall 2020 and 17 "bounces" and 1 successful crossing in 24 days during spring 2021.  As far as we know, the bear has not crossed back but his collar has stopped uploading locations.

The second map shows his entire history, including his parent's home range areas (where he was probably born).  We identified his parents using DNA.  Note how close his movements got to the Bitterroot Ecosystem boundary, illustrating the value of providing crossing mitigation to facilitate movements between the ecosystems. 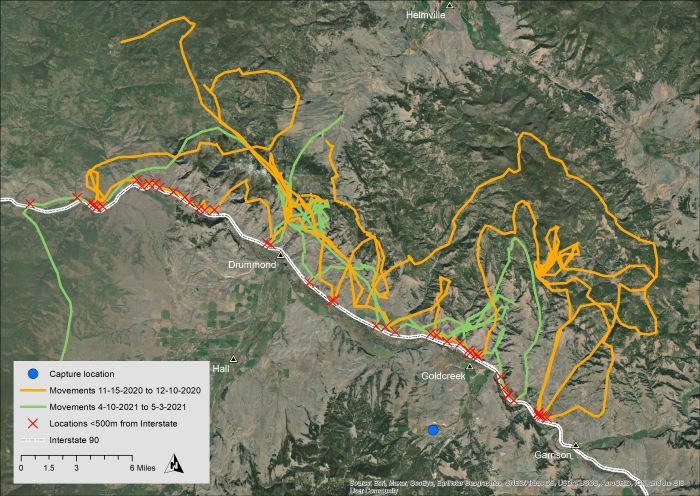 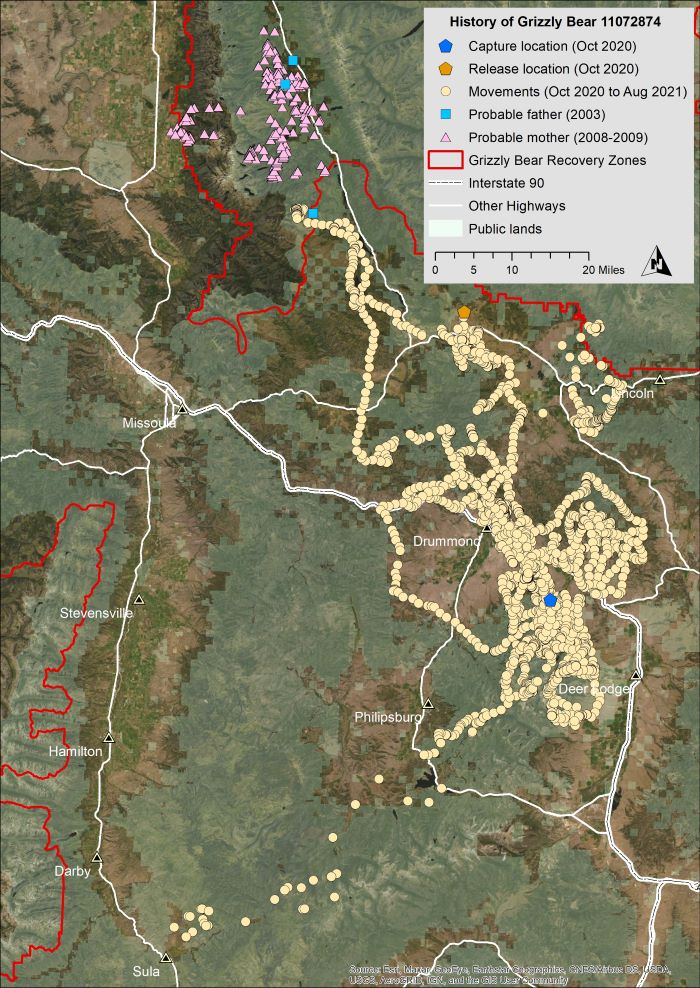 By tailoring fence design and placement, you can reduce wildlife injuries and decrease damage to your fence.