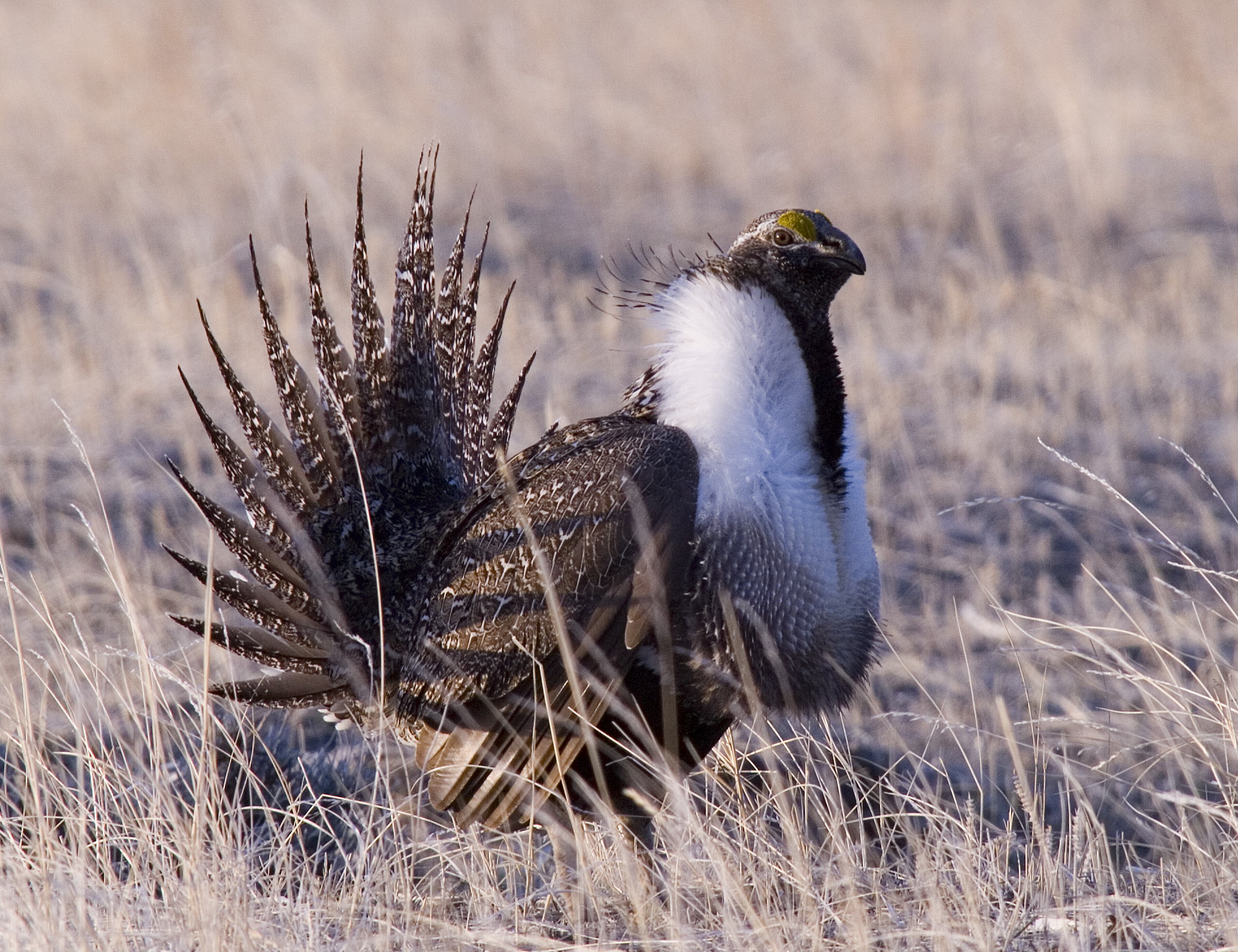 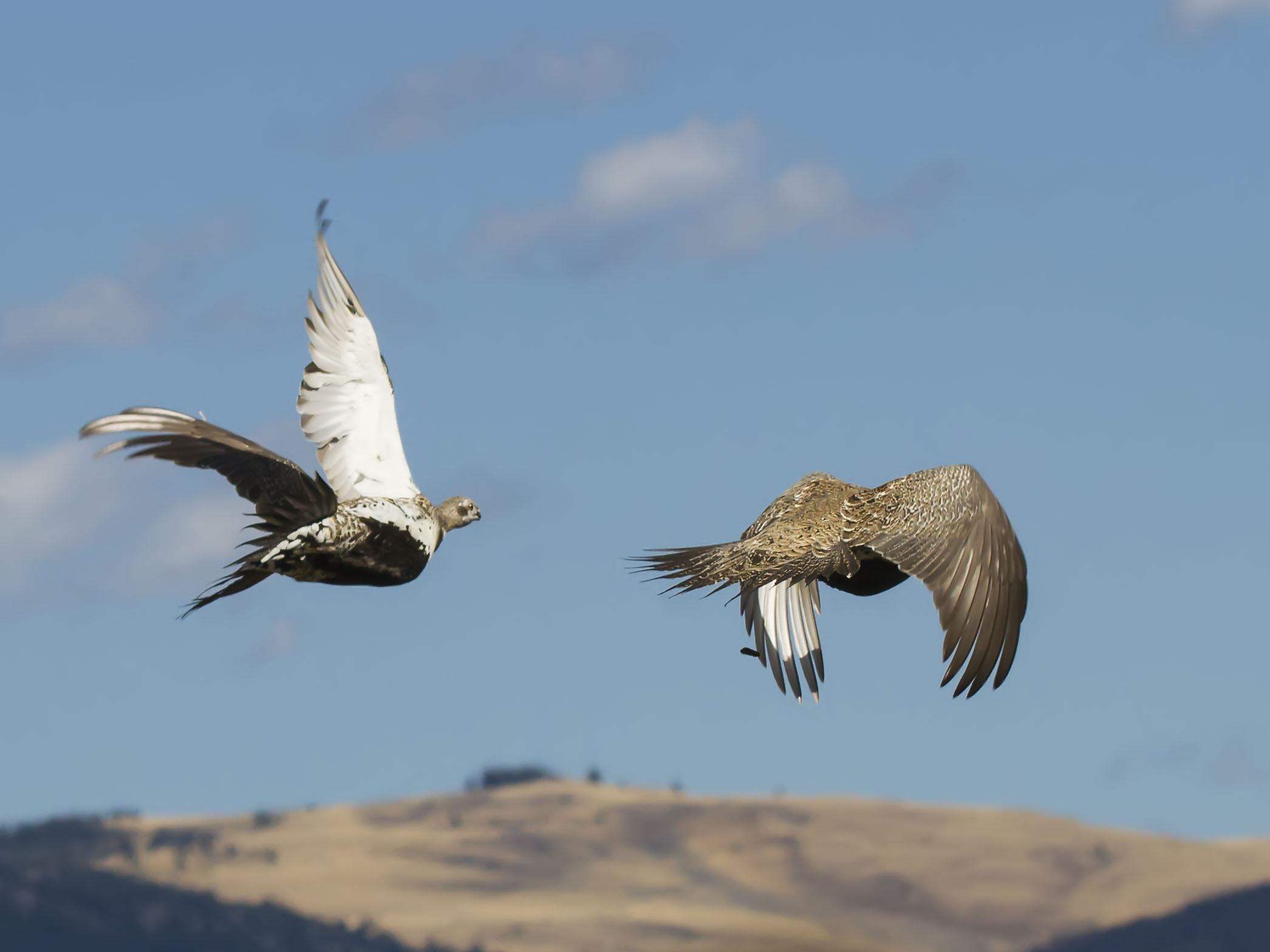 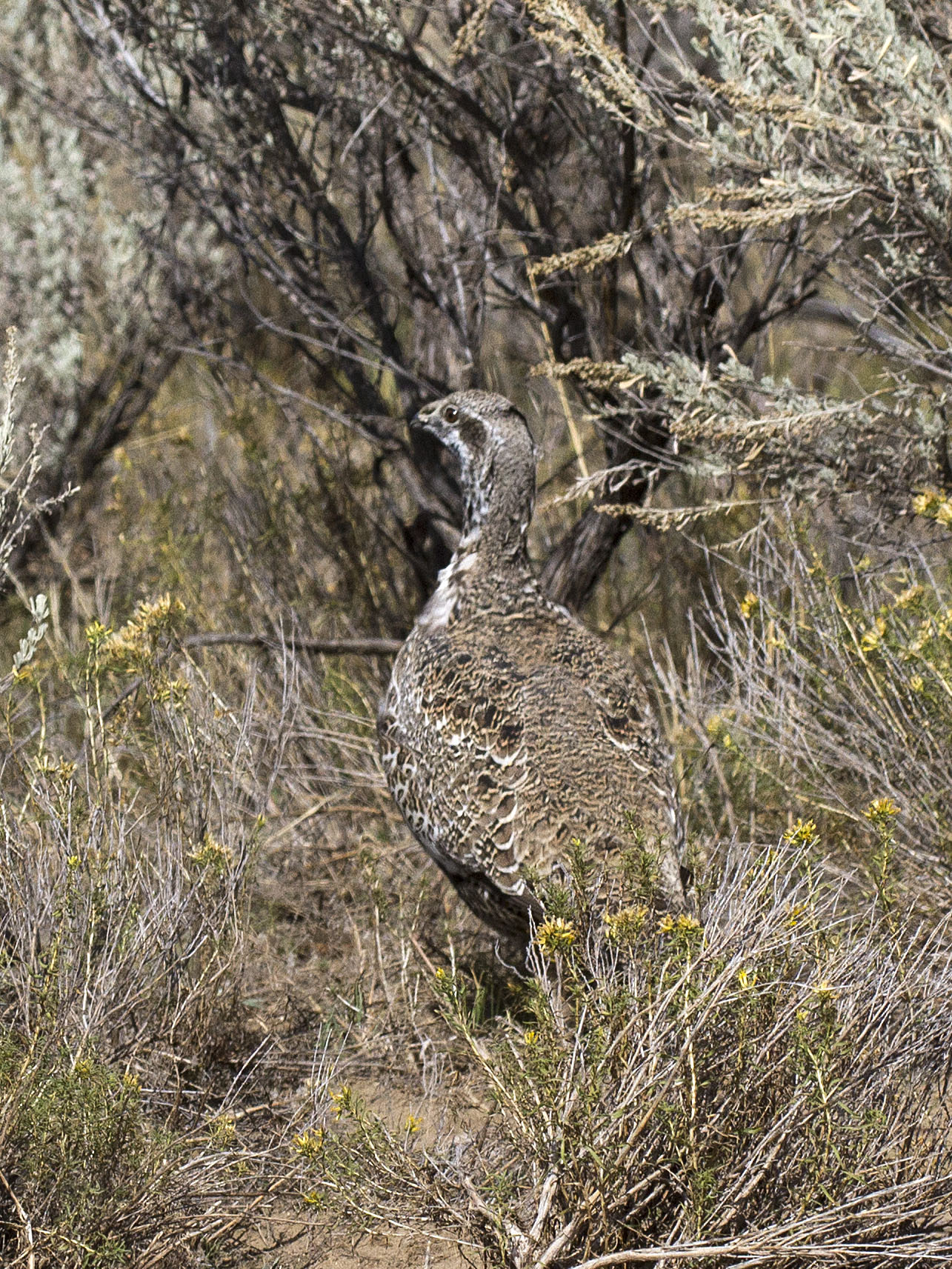 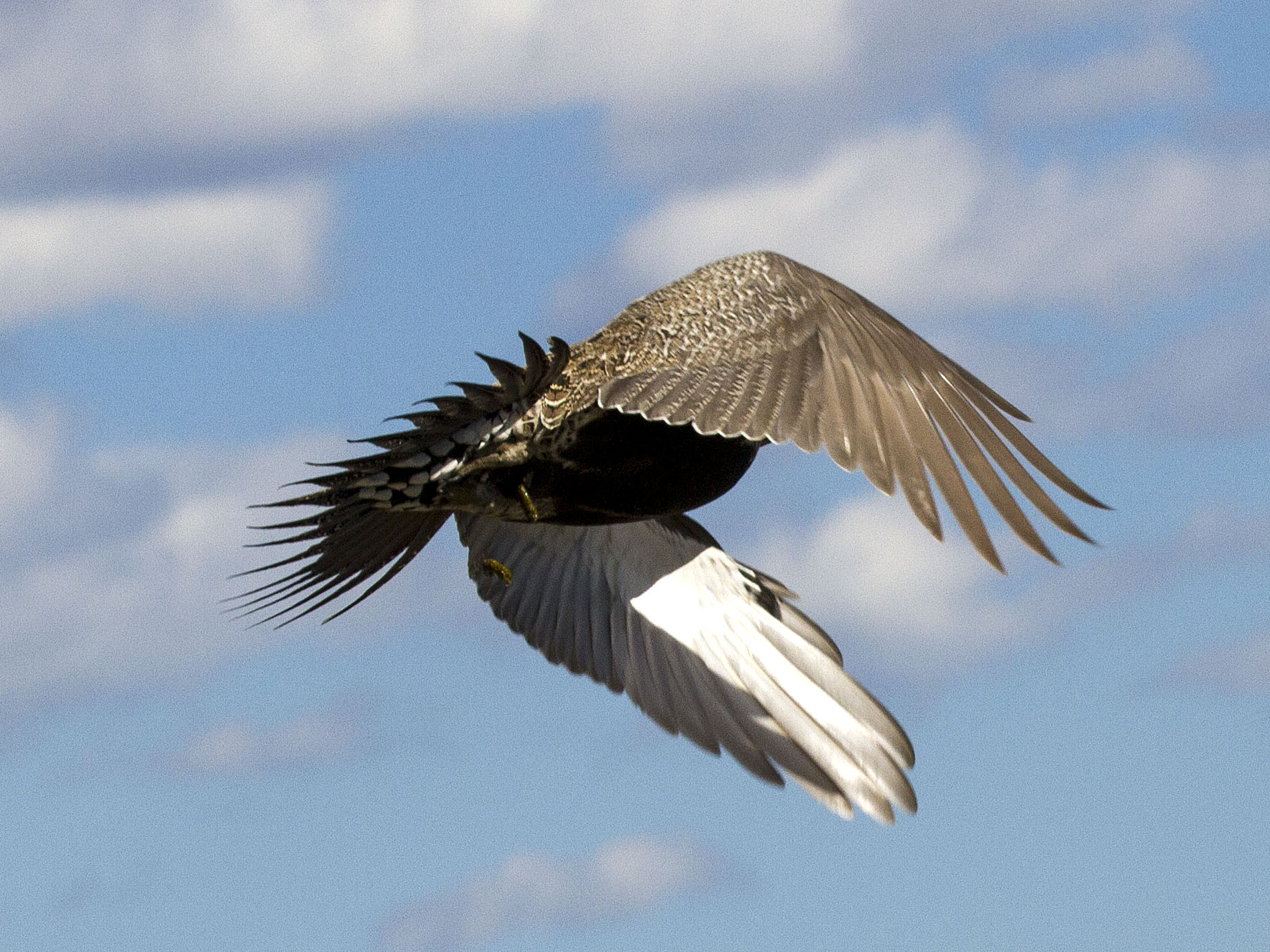 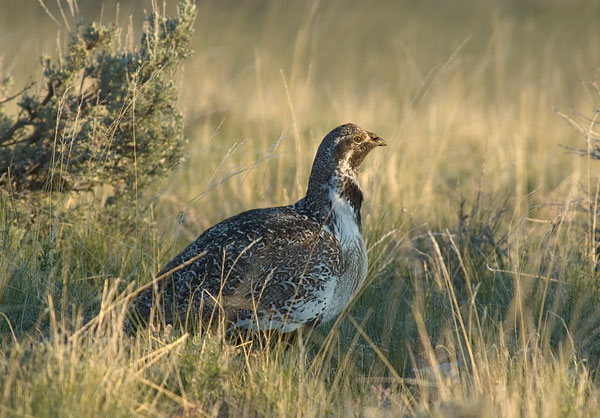 An icon of the American West, sage-grouse are found throughout Montana’s sagebrush steppe grasslands. This large grouse is well-known for its elaborate courtship displays. Each spring male grouse congregate at dawn on display grounds, called leks, and strut with tail feathers fanned and make popping noises with their bulbous air sacs. Bird watchers and photographers travel from around the world to observe this unique “dance.” In fall, when grouse are more cryptic, hunters enjoy searching the sagebrush for this unique game bird. Unfortunately, the sagebrush habitat that these grouse call home has been declining, leading to fewer grouse across the state.

The purpose of the council was to “to gather information, furnish advice, and provide to the Governor recommendations on policies and actions for a state-wide strategy to preclude the need to list the Greater Sage-grouse under the ESA, by no later than January 31, 2014.”

The Montana Greater Sage-grouse Habitat Conservation Program was established in September 2014 by Executive Order to provide regulatory protections for the species and establish a mechanism for voluntary habitat conservation actions. A second Executive Order was issued in September 2015 that clarified aspects of the Program and sets January 1, 2016 as the deadline for compliance by state agencies.

The Montana Department of Natural Resources and Conservation administers the Program.

Sage-grouse are managed as an upland game bird with limited hunting opportunities in Montana.

Montana, Wyoming, Oregon, Nevada, and Idaho are the strongholds for sage-grouse across their range and have been the focus of multiple, recent petitions to list the species under the federal Endangered Species Act. The primary concerns for sage-grouse are loss and fragmentation of their habitat. In Montana, ongoing conversion of native shrub-steppe to cropland agriculture and new energy development are the biggest threats to conserving sage-grouse habitat.

FWP worked with conservation and science partners to develop the Management Plan and Conservation Strategy for Sage-grouse in Montana – Final in 2005. The plan describes the desired conditions for sage-grouse habitat, and identifies risks confronting habitat and sage-grouse populations based on the best available information at the time. Emerging science, especially related to energy development, was used in conjunction with the Management Plan in the development of the Montana Sage-grouse Habitat Conservation Program in 2014. While the new program establishes a regulatory framework for activities in sage-grouse habitat, the management plan remains the most comprehensive document on sage-grouse population dynamics and habitat requirements in Montana.

To provide for the long-term conservation and enhancement of sagebrush steppe/mixed grass prairie complex within Montana in a manner that supports sage-grouse and a healthy diversity and abundance of wildlife species and human resources.

Montana Greater Sage-grouse population estimates and associated uncertainty, and the number of known breeding sites (called leks) are reported annually in compliance with MCA 87-1-201(1)(11), as amended in 2017.

The greater sage-grouse (Centrocercus urophasianus; hereafter sage-grouse) is a gallinaceous bird species endemic to semi-arid sagebrush (Artemisia spp.) habitats in western North America (Schroeder et al. 1999). The loss and degradation of the sagebrush habitats upon which this species depends has led to its extirpation from over half of its original range (Schroeder et al. 2004). Threats to sage-grouse populations and the sagebrush landscapes on which they depend vary across their range, including increasing oil and gas development (Naugle et al. 2011), conifer invasion into sage steppe habitats (Baruch-Mordo et al. 2013), conversion of sagebrush to crop fields (“sod-busting”; Walker 2008), disease (i.e., West Nile virus; Walker and Naugle 2011), urban encroachment in sagebrush landscapes (Brunson and Huntsinger 2008), and in some cases livestock grazing (Connelly et al. 2004). Dramatic declines in sage-grouse populations have led to the recent designation of this species as "warranted" for protection under the federal Endangered Species Act (ESA), but precluded by more pressing issues (ESA; United States Department of the Interior 2010). As recently as 2015, the U.S. Fish and Wildlife Service (USFWS) considered it for listing under the federal Endangered Species Act. On Oct. 2, 2015, USFWS published its decision that listing was not warranted due to the commitments states such as Montana made to institute regulatory mechanisms and habitat protection measures.

Private lands contain 30% of the 48 million hectares of sagebrush habitat on which sage-grouse depend, including key sage-grouse breeding areas. Montana is among the states with the most sagebrush in private ownership (Connelly et al. 2004). For landscape species such as sage-grouse, private lands conservation and maintaining “working landscapes” has become a major means by which conservation and management occurs (Raven 1990; Brunson and Huntsinger 2008). Sod-busting and ranchland conversion to commercial or residential developments are occurring at high rates in the West, and the effort to sustain working ranches is a forward looking approach to landscape conservation (Brunson and Huntsinger 2008).

Research suggests that, done appropriately, livestock grazing can be used as a tool to improve sagebrush habitat for sage-grouse (Connelly et al. 2004). Still, no study has quantified the direct effects of grazing systems on sage-grouse populations. Currently there are at least four sage-grouse grazing studies that have been implemented across the range of sage-grouse, including this project, to begin to fill that knowledge gap. A major goal of this project is to evaluate the effectiveness of grazing systems designed by the Natural Resources Conservation Service (NRCS) under the Sage-Grouse Initiative (SGI) to improve sage-grouse habitat, and provide this agency with information regarding best grazing management practices for sage-grouse. In addition, we categorize both SGI-enrolled land and land not enrolled in SGI on our study area into more specific grazing treatments related to the timing of grazing, enabling us to generalize the results of this study to other grazing systems (e.g., systems managed by FWP):

Each of the pasture-specific grazing treatments defined above are considered in conjunction with the pasture’s previous year grazing history, resulting in 16 different categorical levels for analysis. This will allow multiple agencies, private entities, and landowners to better manage for sage-grouse in relation to livestock grazing. Several partners including NRCS, the University of Montana, FWP, the Department of Natural Resources and Conservation, and the U.S. Bureau of Land Management (BLM) oversee this project and are regularly consulted regarding its design and results to ensure that our products are meeting their needs.

Adult female (hen) survival, nest success, and chick survival are the three most important factors influencing the population growth of sage-grouse—more influential than, for example, nest initiation dates or clutch sizes (Taylor et al. 2012). In addition, past research in other locations has shown that vegetation variables such as taller grass height translate into higher nest success for sage-grouse hens (Doherty et al. 2010). Thus, our main goal is to evaluate the direct effects of livestock grazing systems on the vital rates and population dynamics of sage-grouse and their associated habitat in Musselshell and Golden Valley counties, Montana. Our long-term objectives are:

This project is intended to last ≥ 10 years. The long-term aspect of this study is important because habitat may not immediately improve to the desired condition due to changes or management (e.g., a new grazing system; Crawford et al. 2004), especially in areas that have been slowly degraded over time, because habitat improvements may not be immediately measurable. In addition, annual weather fluctuations, particularly of precipitation, are a major driver of the vegetative structure and composition of rangeland ecosystems (Gillen and Sims 2006). Weather effects are one of the most important drivers of prairie-grouse production (Flanders-Wanner et al. 2004) and powerful enough that they can negate effects of grazing or act in concert with grazing to determine the succession of plant communities (Gillen and Sims 2006). Thus, long-term data is needed to tease out the effects of grazing versus weather on sage-grouse and their habitats. There may also be a lag in the response of sage-grouse populations to management because yearlings do not always breed and nest during their first potential breeding season (Emmons and Braun 1984b, Connelly et al. 1993, Gregg et al. 1994, Crawford et al. 2004). In addition to the effects on vegetation, annual variation may confound effects of treatments on population vital rates. Finally, hens have a tendency to exhibit site tenacity where they return to the same area in which they nested in previous years, even though the habitat has been substantially altered since the hen began nesting there. This suggests that the abundance of nests in a pasture may reflect previous rather than current habitat conditions (Rotenberry and Wiens 2009). Consequently, this species may not respond quickly to habitat changes. Knick and Rottenbery (2000) showed that several shrub-steppe avian species including Brewer’s sparrow (Spizella breweri), horned lark (Eremophila alpestris), and sage sparrow (Amphispiza belli) seem to exhibit this “habitat memory” up to 10 years. Thus, population vital rates should be assessed over long intervals in order to make more effective management decisions (Taylor et al. 2012).

It is increasingly important to make evaluations at an ecosystem level; grazing systems will not only impact sage-grouse, but also vegetation, many other wildlife species, and the food (i.e., insects and plants) that sage-grouse and other wildlife depend on. Thus, it is important to evaluate the effects of grazing systems on these multiple components because these components are interconnected. We are incorporating these components into our project by collaborating with the University of Montana and Montana State University to evaluate the effects of grazing systems on songbirds and insects, respectively. These projects are funded and conducted independently of our sage-grouse evaluation, but dovetail with our sage-grouse work to look at impacts of grazing on other sagebrush and grassland birds as well as availability of insects that are an important food resource for sage-grouse. This collaborative approach is essential to understand multiple facets of the impacts of grazing on rangelands and wildlife, and it further leverages the funding contributions and landowner relationships of this project. This approach also presents an opportunity to determine the long-term impacts of changes in land-use practices at the larger ecosystem scale—the scale at which these changes are occurring.