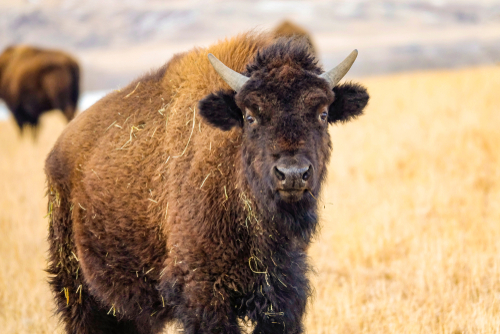 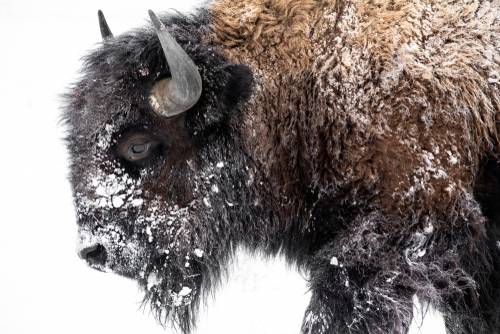 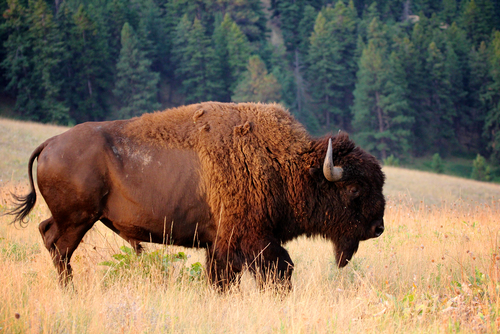 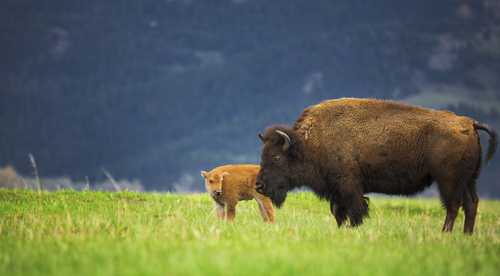 Bison (Bison bison) are the largest terrestrial mammal in North America. While bison and buffalo are used interchangeably, in North America the scientific name is bison. Their large, low-hanging heads allow them to gather low-growing vegetation, even in the snow, and their thick fur insulates them from extreme environmental conditions. Their sharp horns aid in self-defense. These unique physical characteristics that cause bison to be easily recognized also play an important role in their historical success.

The American bison was named the national mammal of the United States on May 9, 2016.

Bison flourished throughout the majority of Montana prior to the settlement of the American West and were a keystone species of the Great Plains ecosystem. In the summer of 1806, Meriwether Lewis recorded passing immense herds of buffalo in the Marias River area. Charles M. Russell — America's "Cowboy Artist" — cast his first bronze sculpture depicting the Plains Indian buffalo hunt. He commonly depicted the iconic animal in his classic artwork.

Following decades of substantial loss, bison were saved from complete extinction by a diverse group of individuals but are now restricted to particular geographic areas or kept behind fences. Montana is one of the last places where bison live, most notably in Yellowstone National Park and at the Bison Refuge near Moiese.

Montana offers hunting opportunities for bison in certain parts of the state.

The Interagency Bison Management Plan is a cooperative, multi-agency effort that guides the management of bison and brucellosis in and around Yellowstone National Park . The plan was developed by the National Park Service, USDA-Forest Service, USDA-Animal & Plant Health Inspection Service, Montana Department of Livestock and Montana Fish Wildlife & Parks. After more than 10 years of negotiations, the plan was adopted in 2000.

Specifically, the IBMP seeks to:

For the latest information on the IBMP, visit here.

The animals are part of the Bison Quarantine Feasibility Study (QFS), the research project that began in 2004 directed by FWP and the U.S. Department of Agriculture's Animal and Plant Health Inspection Service to produce bison free of brucellosis.

The American bison was named the national mammal of the United States on May 9, 2016. Bison are the largest mammal in North America. Male bison (called bulls) weigh up to 2,000 pounds and stand 6 feet tall, while females (called cows) weigh up to 1,000 pounds and reach a height of 4-5 feet.