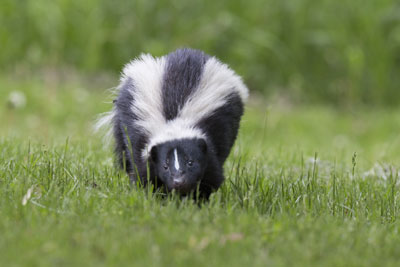 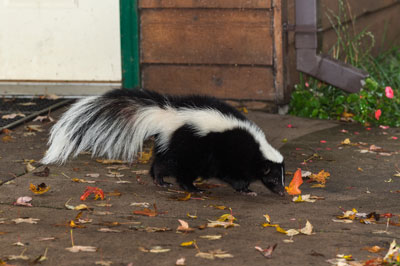 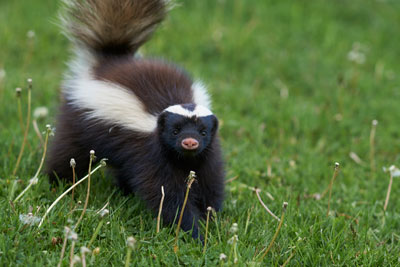 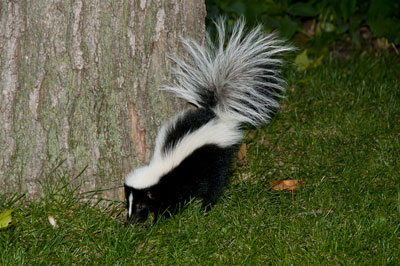 Skunks are excellent "mousers," and may even be better at it then cats. They eat many mice, rats, other small rodents, grubs, and a variety of insects. They will also take the eggs and young of ground-nesting birds. There are many instances of skunks living in close contact with humans under sheds, decks, houses, and even in garages, without ever spraying their human hosts. Skunks are generally shy, nonaggressive, retiring, and nocturnal creatures. With a little acceptance and understanding, you can live with skunks, if you do not unduly alarm them. However, there are many instances, especially where you have pets or young children, where this may not be possible.

Varies between seven to 10 weeks, but usually nine weeks.

Young born in May through early June, naked and blind (three weeks), and nurses for six to seven weeks.

Only one litter a year averaging four to six young.

The young stay with the mother until fall. Both sexes mature by the following spring.

Skunks have the potential to live to about 10 years, but few live longer than three years in the wild.

Skunks are opportunistic omnivores, eating plant and animal foods in about equal amounts during fall and winter. They eat more protein (animal matter) during spring and summer, when they feed heavily on available insects. During spring and summer grasshoppers, beetles, crickets, grubs, cutworms, and other insect larvae are heavily consumed. Additionally they eat bees, wasps and their hives, larvae, and honey. Many of the insect larvae they eat are injurious to agricultural crops and other plants in the yard and garden. Mice are also a very important part of their diet, especially in winter. Skunks will also take rats, cottontail rabbits, bird eggs, and other small mammals. Food analysis of 414 skunk stomachs showed 41.3% insects, 22.1% fruits and berries, 14.1% mammals (mostly mice), 12.9% grains, 5.4% carrion, 2% birds, and 2.2% unidentified.

Their home is customarily a den in the ground, but they can occasionally be found in a stump, refuse dump, woodpile, cave, rock pile, crevice in a cliff, or under a building. A skunk may dig its own den, particularly for its young, but more often it takes over an abandoned den of another animal.

Skunks may be out at any time of day, but most generally they start foraging in the evening and stay out most of the night. Skunks locate their food or prey more by sense of smell than by sight. Skunks do not hibernate, but they do put on a layer of fat for winter. When the weather is colder skunks spend more time in their dens. The amount of time skunks spend out foraging in winter is more dependent on temperature than anything else. Skunks do not normally climb so keeping them out can be easier than for climbing species

Skunks become a nuisance when they move or burrow under buildings and foundations. Skunks will get into garbage and refuse when not secured. Additionally, they will forage under bird feeders and in compost piles, digging as they go. Skunks also dig holes in lawns, golf courses, and gardens to search for insects, grubs, and worms. Skunks have been known to occasionally kill poultry and eat eggs. They also prey on upland game bird, waterfowl, and other ground-nesting bird eggs. Young children or pets, who may not understand skunk defense, may get sprayed when harassing or alarming a skunk. However, skunks are generally very amiable if left alone and will not spray unless they feel threatened. The spray does not cause blindness.

Practice good sanitation by properly disposing and securing garbage or other food sources that attract skunks. Skunks will often enter sheds, barns, garages, and crawl spaces in search of mice and rats or to establish dens. Mouse and rat control programs and covering entrances will remove these attractants.

Valuable as a destroyer of vermin, such as mice, and harmful insects and their larvae. Skunks are furbearers, with a market for its fur. Fur is considered to be 70% as durable as otter.

Skunk odor can be extremely nauseating and is a complex chemical compound. For one of the best analyses of skunk musk and why some deodorizers work and others don't, see Dr. Wood's Skunk Website, from the Deptartment of Chemistry at Humboldt State University:

Many old remedies do not work, such as tomato juice or vinegar. There are several commercial skunk odor removers on the market. However, when you need them you do not usually have time to buy them.

While the mixture is bubbling, wash the affected area, and then rinse off with water. Repeat as needed.

Removing attractants that draw skunks is the best possible prevention. Do not leave dog and cat food or garbage where skunks can get to it. A good rodent control program will also discourage skunks. Clean up old piles of lumber and brush where skunks may live. You should board up entries and crawl spaces under sheds, houses, and other buildings. Entrances can be blocked with chicken wire, and it should be buried at least 6 inches. Buried wire should be set in an "L" shape and extended out another 6 inches to keep the skunk from digging under the wire.

Installing one-way doors at the entrance of dens is an option. If the skunk digs new entrances around the door, plug them up. Leave the one-way door installed for several days to ensure that the skunk is really gone.

Mild harassment of the skunks works some of the time. Leave repellents such as ammonia-soaked rags or mothballs in burrows or where skunks have to pass to go in and out of their dens. It has even been suggested that leaving a light on under a shed or deck utilized by a skunk may make it move out.

Skunks are relatively easy to catch. Many Fish, Wildlife & Parks offices and some city or county animal control offices have live traps that they will loan you. They can also refer you to persons who trap nuisance animals for a fee.

Traps may be baited with sardines, canned tuna, or fish-flavored cat food. Cover the trap with a tarp or old blanket. This will make it easier for you to approach the trapped skunk and move it without being sprayed. You should approach the trap quietly and spread the cover over the open trap entrance. This provides a dark secure environment for the skunk. You can then gently move the skunk to your vehicle and even transport it easily without the skunk spraying. It has been shown that transporting a skunk in a covered trap has proven to be perfectly safe. At your skunk-release site, set the trap up so that you can remotely open the door. It is recommended that skunks be transported at least 10 miles from the capture site.