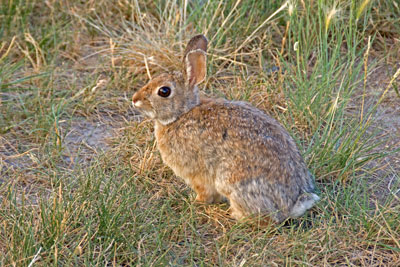 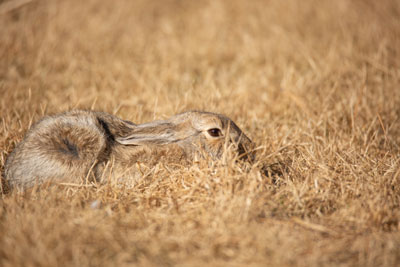 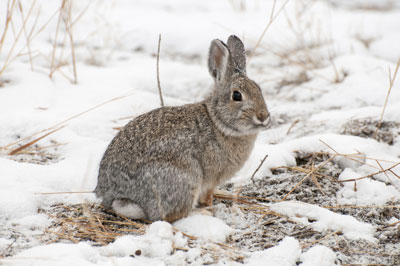 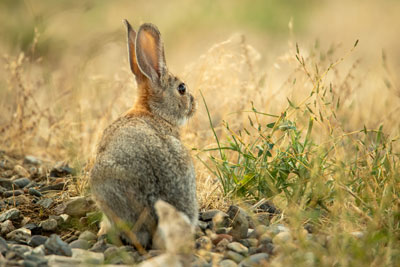 Those cute, cuddly rabbits in the front yard can sometimes turn into monsters. They can do considerable damage to flowers, vegetables, trees, and shrubs. In Montana, we have eight species in the rabbit family Leporidae: the eastern cottontail, mountain cottontail, desert cottontail, snowshoe hare, white-tailed jack rabbit, black-tailed jack rabbit, pygmy rabbit, and the American pika. About half of these have limited ranges in Montana and are consequently uncommon in most of the state or in urban areas.

Domestic rabbits that have been released or have escaped tend to cause more damage than the wild populations. These rabbits have little fear of humans, have high reproductive rates, and they consume a variety of vegetation. Domestic rabbits are generally larger than most wild species, making it difficult for cats to take them on, and being in an urban area they have few other predators. As true hares, they also may dig large underground warrens or dens causing further damage. However, no matter the species, wild or domestic, your control of rabbits will be basically the same.

Rabbits consume a broad variety of plants, usually concentrating on green vegetation, but they also consume and damage woody plants, especially in winter. Rabbits eat randomly and rarely eat an entire plant. This tactic ensures a steady supply of food, but it spreads the damage to a larger number of plants for the homeowner. Rabbits do considerable damage when they clip off twigs and gnaw the bark from small trees and shrubs, which usually occurs during the winter.

Making the habitat less attractive to rabbits is often an effective control method. Removing rock, wood and brush piles, mowing tall weedy areas, etc., will sometimes cause rabbits to leave in search of more suitable habitat or at least decrease the rabbit density in your yard. An aggressive dog within a fenced yard, both day and night, is an effective deterrent to increased rabbit populations.

The use of traps can be an effective way to remove rabbits, but can be difficult to bait during the summer due to the abundant food supplies available. Traps should be placed where the rabbits are feeding or resting. Apples, oats, corn cobs, dried leafy alfalfa, and clover are good cold-weather baits. Carrots, brussel sprouts, lettuce, cabbage, and even bread are good baits during the warmer months. Spraying the inside of a trap with apple cider has also shown to be effective. Trailing scents are available commercially to lead rabbits to your traps, in addition to various rabbit lures for bait. Trapping needs to be continuous as rabbits are prolific, and as one is captured another can move in to take its place.

There are a number of chemical repellents available at garden centers, but most have been less than satisfactory. There are also no registered toxicants or fumigants for use on rabbits.

Shooting may be used if permitted by local law and covenants. Hunting rabbits in adjacent areas is also an effective control tool. Currently, rabbits may be hunted year-round in Montana with no bag limits.

Rabbit-proof cages and fences are a practical and inexpensive means of protecting smaller areas or valuable plants. Individual woody shrubs and young trees can be protected by placing a wire guard or cage of woven wire netting around them. Plastic animal netting can also be effective, but it has to be securely fastened to prevent a persistent rabbit from getting through. Two-inch poultry wire works, but the barrier must be placed several inches from the plant. Rabbits can also be excluded from an area by constructing a rabbit-proof fence. Rabbits are not good climbers, do not ordinarily jump fences, and except for domestic rabbits are not good burrowers. A fence of at least 1-inch mesh wire, 18-24 inches high around whole gardens, flower beds, or other places will provide needed protection. The bottom of the fence can be buried in the ground at least 6 inches to prevent rabbits from digging under the fence. Tree wraps will also help prevent gnawing of small trees, but make sure that you wrap the trees high enough that rabbits can't reach above the wrap, especially when standing on deep snow.