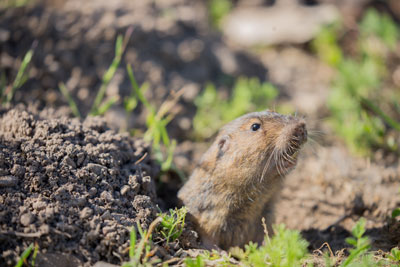 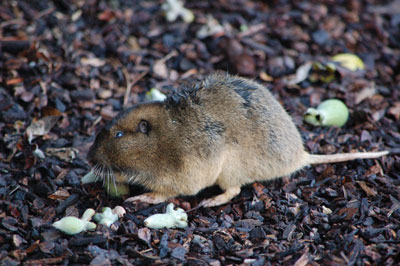 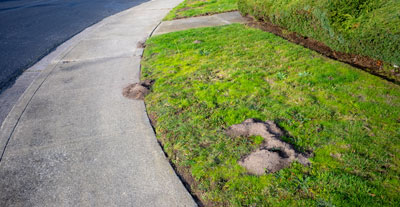 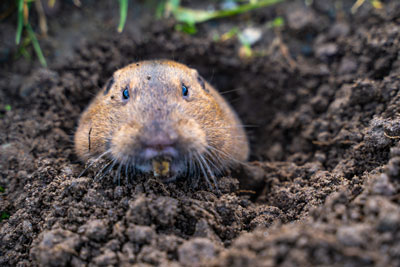 Gopher, pocket gopher, or pouched rat are all names for the northern pocket gopher. The northern pocket gopher seldom appears above ground; when it does, it rarely ventures more than 2 1/2 feet (750 mm) from a burrow entrance. However, the name gopher is often wrongly used for various ground squirrels and prairie dogs, which do regularly appear above ground. These other small mammals must not be confused for gophers, as several of these species are or may be protected.

The upper incisors and front claws are long and sharp and made for digging. The neck and shoulder muscles are powerful. A sensitive tail is used by the gopher to navigate backward within a burrow. A special adaptation allows the gopher to close its lips behind the teeth while digging to prevent soil from entering its mouth.

Burrows include food storage areas, nest sites, tunnels for depositing feces, and tunnels made while foraging for food. Gophers prefer moist, sandy soils, such as the good soils of meadows or along streams, most often in mountains, but also in lowland grasses, cultivated fields, roadsides, lawns, and along river banks. They can excavate extensive burrow systems sometimes reaching 400 to 500 feet in length.

Gophers use all parts of plants, and diets vary on a seasonal basis partly in response to availability and partly because of quality and succulence. Roots and tubers provide most of the winter diet, whereas spring and summer diets are usually 60 to nearly 100 percent leaves and stems.

Gophers can cause great deal of damage to lawns, golf courses and agricultural fields. They make crescent-shaped mounds that are hollow inside. The mound will characteristically have a plug to one side. One pocket gopher can bring 2-4 tons of soil to the surface in a year's time.

Farmers, nurserymen, and gardeners usually view northern pocket gophers as pests. Since gophers can cause significant damage to crops and gardens, they are actively trapped. Gophers feed entirely on vegetation, mostly roots of broad-leafed plants, bulbs, and tubers. Vegetables are often eaten below the surface with only the leafy material left above ground. Sometimes the gopher will actually pull the entire plant below the surface as seen in cartoons.

Some people plant gopher purge (Euphorbia lathyris) as a means of deterring gophers. The plant is poisonous, and there is no evidence that it is effective in repelling or controlling gophers. Further, it may become a problem weed, and it can be toxic to children or pets.

Trapping is very effective in controlling pocket gophers in small areas. To be effective, research has shown that because of the pocket gopher's reproductive capacity, you need to remove more than 70% of the gophers. Trapping is most effective in the spring or fall when gophers are pushing up new mounds. If you catch nothing in a trap in two days, move it to a new spot. In spring or early summer, when gophers are mating or when young may be present, it is a good idea to reset traps in the same spot after the first gopher is caught.

You will need to find the main tunnel to place your traps. You will want to set the traps in both directions in the main tunnel, or set one in each lateral tunnel. You may have to experiment with different traps and where to place them. Some trappers have had more success when they leave tunnels open; others, after placing the trap, close off the tunnel with a board or sod. Traps need to be attached to a stake with wire. To maximize your efficiency, 10 to 15 traps per acre are generally needed.

Exclusion is generally not practical and it has had limited success. However, in some circumstances, exclusion can prevent damage. An underground fence of 1/4- or 1/2-inch wire mesh can be used to protect individual flower beds, trees, or shrubs. The fence needs to be buried at least 18 inches. Additionally, buried utility cables or irrigation pipes may need protection by enclosing them in various materials that resist gopher gnawing. Also, when installing underground cable or pipe, the trench should be filled with large gravel, at least 1 inch or greater. The gravel should surround the pipe at least 6 inches, to keep gophers from digging near the pipe. Gophers cannot bite into the surface of a cable or pipe if it exceeds 2 7/8 inches in diameter.

Prevention and Control of Wildlife Damage.