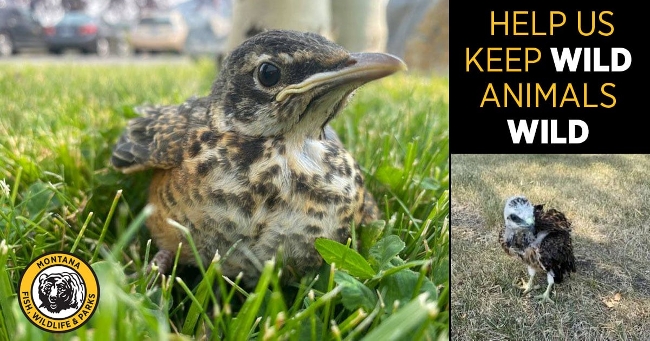 FWP believes wild animals thrive better in the wild and wildlife prefers to be wild and live out their lives in the wild. Nature provides them the best options for survival and a better quality of life. They have plenty of natural habitat (food, water, shelter, space) and thrive better with other wildlife than humans.

WHO CAN REHABILITATE WHAT

Montana WILD's Wildlife Rehabilitation Center in Helena rehabilitates wild birds, bears, bobcat, mountain lions, and other small mammals that are less than 1 years-old. It does not accept the following: ungulates (deer, elk, moose), canids (fox and wolf), or any rabies vectors: https://dphhs.mt.gov/publichealth/cdepi/diseases/rabies

If you find an animal that is clearly injured or in distress, do NOT touch the animal. Call the Wildlife Center for advice on how to proceed, 406-431-1110.

No wildlife rehabilitators in the state, including the FWP’s MT WILD Wildlife Rehabilitation Center, are permitted to rehabilitate:

These facilities are permited to rehabilitate raptors such as hawks, owls and eagles:

IS THIS ANIMAL REALLY ORPHANED?

Oftentimes people think they are rescuing an orphaned animal; however, it is important to realize that wildlife care for their young much differently than humans. They have strategies to provide the highest chance of survival for their young.

One strategy that some species, particularly those species that are more commonly seen as prey (deer, rabbits, birds), use is to distance themselves from their young for many hours at a time. This helps to keep predators away from their young. For example, fawns are born without a scent and it is safer for them if their mother, who has a scent, is not nearby. This also can potentially distract a predator into focusing on the doe vs. their offspring.

There are several reasons you should not approach or pick up a baby animal. Humans are seen as predators to these species so your presence will keep the parent away for longer. Many of these animals also carry diseases or parasites that could put you or your pets in harm.

What can you do?

Call Montana WILD. If you are unsure if an animal needs help, call the Montana WILD Wildlife Rehabilitation Center at 406-431-1110

No wildlife rehabilitators in the state, including the FWP Wildlife Rehabilitation Center, are permitted to rehabilitate ungulates, such as deer, elk, and moose, due to diseases such as chronic wasting disease, brucellosis, and bovine tuberculosis. These diseases can significantly reduce the size and health of ungulate populations. Bringing orphaned or injured ungulates into a rehabilitation center with the intent for later release could introduce a disease into populations where it was not present. In addition, these animals tend to habituate quickly and can cause problems after release.

Very few “orphaned” ungulates are actually orphaned. The parent settles them in a spot, and the young survive by staying very still until the parent indicates it is okay to move. The parent will typically stay out of sight to keep predators from finding the fawn from her smell or presence.

Does this bird need your help? At first glance you might think yes, but in fact this is a healthy young Gray Catbird who is just learning to fly from the ground up. Moments after this photo was taken, a parent swooped down to check on and feed this youngster a fat caterpillar. When healthy young birds like this get brought into people’s homes or to our wildlife center, it greatly reduces their chance of survival. It is almost always best to leave baby birds alone.

What can you do?

Call Montana WILD. If you are unsure if an animal needs help, call the Montana WILD Wildlife Rehabilitation Center 406-431-1110

Roadkill or Other Dead Animals

FWP does not respond to general roadkill or deceased animal complaints unless it is a specific species of concern such as bighorn sheep, eagle, or grizzly bear, a confirmed poaching incident, a disease issue, electricution or an issue of public safety.