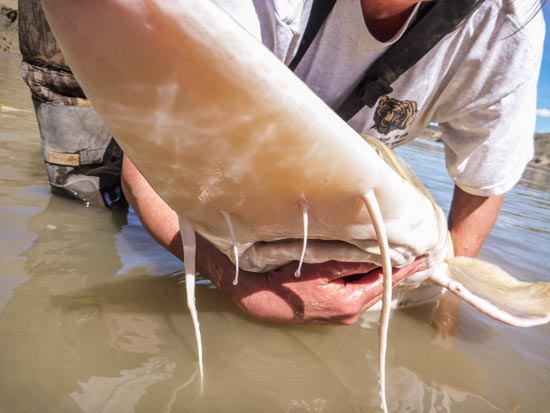 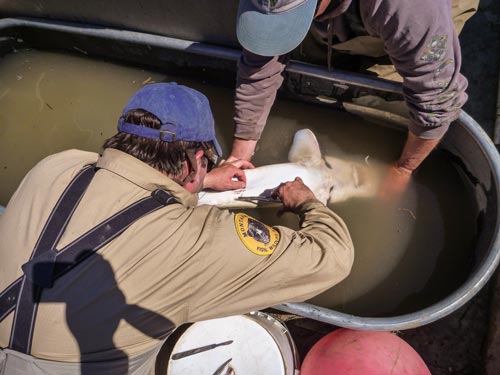 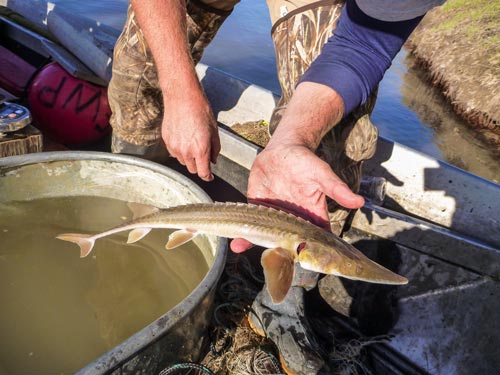 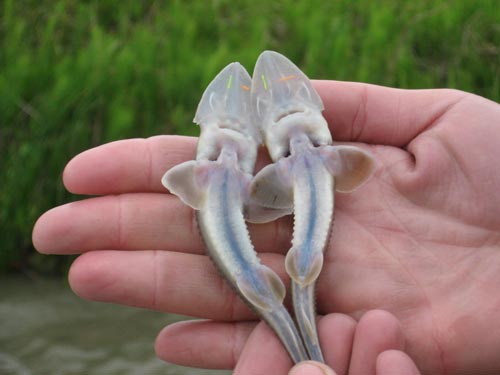 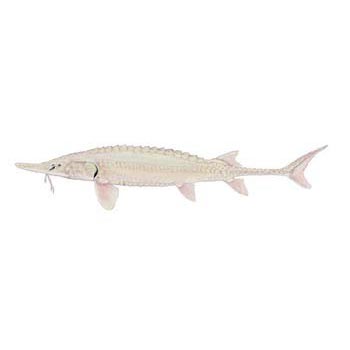 The pallid sturgeon is one of the rarest and largest freshwater fish in North America. It and the smaller, more common shovelnose sturgeon, are the only sturgeon species native to the Missouri and Yellowstone rivers in Montana. Pallid sturgeon can live to be older than 50 years, can reach lengths of over 6 feet, and can weigh over 75 pounds.

The pallid sturgeon is currently listed as a Species of Concern in Montana and was classified as "endangered" by the U.S. Fish and Wildlife Service in 1990. The population has been declining during at least the past 50 years with only about 200 adults remaining in the upper Missouri River and limited natural reproduction.

The pallid sturgeon is one of the rarest and largest freshwater fish in North America.

The pallid sturgeon is a Montana Species of Concern and was classified as "endangered" by the U.S. Fish and Wildlife Service in 1990. Its historic range included the middle and lower Mississippi River, the Missouri River, and the lower reaches of the Platte, Kansas, and Yellowstone rivers. In Montana, pallid sturgeon have been found in the Missouri River between the mouth of the Marias River and Fort Peck Reservoir; between Fort Peck Dam and the North Dakota border; and in the lower ~155 miles of the Yellowstone River, downstream of the mouth of the Tongue River. Currently, these areas are comprised of aging, wild fish and are estimated to contain fewer than 30 adults upstream of Fort Peck Dam and fewer than125 adults upstream of Garrison Dam.

Pallid sturgeon is a long-lived species and may not reach sexual maturity until 5-7 years for males and greater than 15 years for females. Individuals typically do not spawn annually, as pallid sturgeon often make long-distance spawning migrations that can span hundreds of miles. Although mature females are highly fecund (producing more than 150,000 eggs to spawn), many offspring do not survive the first several weeks of life; even fewer survive to spawn themselves and fully recruit to the population. Pallid sturgeon larvae drift in the currents of the river while they develop and eventually settle out of the water column after approximately 10-15 days and several hundred miles, given adequate temperatures and drift distance. Young pallid sturgeon primarily forage on aquatic invertebrates but quickly become one of the top predators in these large-river systems and become piscivorous (fish-eaters) as juveniles and adults.

Pallid sturgeon prefer large, turbid, and relatively warm rivers and they rely on the free-flowing connectivity to complete their life-cycle. Man's alteration of large-river systems is believed to be the primary cause in the decline of pallid sturgeon. Though the process of channelization and the use of levees to reduce the floodplains of these large-river systems have diminished much of the natural river-function, man-made impoundments have had the most profound effect on riverine environments. Impoundments, both large and small in scale, have disrupted natural patterns of flow, temperature, sediment composition, and subsequently fish communities. In many instances, man-made impoundments have blocked upstream pathways for spawning adult Pallid sturgeon and have reduced the distances available for larval pallid sturgeon to develop while drifting in the river current.

Overall habitat diversity, productivity, and availability have been severely impaired. Although some spawning has been documented, few pallid sturgeon fry have been captured and no natural recruitment has been documented for at least 30 years. It is believed that young pallid sturgeon are drifting into the unsuitable habitats in the upper reaches of Fort Peck Reservoir and Lake Sakakawea, where they do not survive. Without recruitment, and without any recovery efforts, the two populations of pallid sturgeon in Montana are expected to go extinct by 2018.

The pallid sturgeon was listed as a federally endangered species in 1990. Because of the wide range of the pallid sturgeon, its extreme rarity, numerous threats to species survival, and the lack of information on species life history and habitats, a team was established to develop this Pallid Sturgeon Recovery Plan.

Recovery of the endangered pallid sturgeon will require restoration of river flows, connectivity, temperatures, turbidity, and instream habitats in order to maintain a self-sustaining population.

Since 1994, artificial propagation has been used to maintain the pallid sturgeon populations in Montana until the needed improvements to habitat and river function can be made. Each year, a few of the remaining wild adult pallid sturgeon are captured, spawned, and released in order to acquire the greatest remaining genetic variability. The fertilized eggs are hatched and the resultant fish are reared in state and federal hatcheries until they are large enough to stock. Additionally, some individuals are retained and are incorporated into the pallid sturgeon broodstock. This broodstock will serve as a source of genetically-pure pallid sturgeon eggs after the existing wild adult populations go extinct.

As the clock winds down for the remaining wild pallid sturgeon, as much information as possible is being gathered in efforts to effectively direct recovery objectives and conservation. Ongoing projects include the collection of movement information from radio-telemetered juvenile and adult pallid sturgeon, monitoring drift-dynamics of larval pallid sturgeon, and understanding how reservoir management and flow-manipulation can aid in the species’ preservation.

Recovery of the magnificent pallid sturgeon will require changes in the way dams and water are managed in the Missouri and Yellowstone rivers. Just as bighorn sheep, mountain goats, mule deer, elk, and antelope are part of what makes Montana the "last best place," pallid sturgeon too are part of Montana's wildlife legacy.

Click here to learn more about the distribution of Pallid Sturgeon in Montana.