Details: License is valid for one elk. Hunters may hold only one general elk license, which can be used for elk as indicated under the “General Elk License” heading on the deer and elk hunting regulations. Montana residents 12-17, holders of a disabled resident conservation license, or residents 62 years and older may purchase this license for $10

Details: The B License is an Antlerless elk license valid during a specific time period and in a particular hunting district or group of districts. Applicants are required to pay full license fee. Cost includes $5 nonrefundable application fee.

Elk B — Over the Counter

Details: Nonresidents applying for any other combination license may not apply. Includes a General Elk license and authorizes fishing and hunting of upland game birds, excluding turkey. Conservation with State Lands, Base Hunting and AISPP must be purchased separately. This license is included in the 17,000 quota of Big Game Elk/Deer Combination license.

Details: The permit must be used with a general elk hunting license. A permit is not a second license and does not allow the holder to kill an additional animal. Rather, it expands the opportunity to hunt for a species in a particular hunting district allowing the hunter to harvest a bull, antlerless or either-sex elk. Residents must hold a valid general elk license to apply. Nonresidents must also apply for a big game or elk combination license to apply.

Details: For former resident who was born in Montana, with current resident relative, other qualifications apply. Conservation with State Lands, Base Hunting and AISPP must be purchased separately. Learn more about Nonresident Licenses.

Details: For former resident, who was born in Montana with current resident relative, other qualifications apply. Conservation with State Lands, Base Hunting and AISPP must be purchased separately. Learn more about Nonresident Licenses.

Details: To qualify you must have previously hunted in Montana as a resident or hold a Montana hunter education certificate. This license requires a sponsor who is a Montana resident family member, including direct In-laws, who also holds a current years resident hunting license. Includes General Deer and Elk, Upland Game Bird and Fishing licenses. AISPP, Base Hunting and Conservation license must be purchased separately. A total of 500 are available. Learn more about Nonresident Licenses.

Details: To qualify you must have previously hunted in Montana as a resident or hold a Montana hunter education certificate. This license requires a sponsor who is a Montana resident family member, including direct in-laws, who also holds a current years resident hunting license. Includes General Elk, Upland Game Bird, and Fishing license. Conservation with State Lands, Base Hunting and AISPP must be purchased separately. A total of 500 are available. Learn more about Nonresident Licenses.

Elk B — Over the Counter

This license is available Over the Counter beginning August 9th.

This license is available over the counter at FWP Offices only.

This license is available over the counter at FWP Offices only.

Aging Elk from their Canine Teeth

Hunters often leave an elk's head in the hills when they must pack out their meat. However, most elk hunters remove the canine teeth and frequently show them to personnel at a checking station. It has been found that this method is quite reliable, and from the canine teeth, an age may be assigned to the particular animal. These ages of animals harvested are important for interpreting the age structure of males and females in a herd and the survival, growth and longevity of various age classes.

The Fish and Game Department requires several types of information to have knowledge about various big game herds. This information is required by biologists to formulate annual management programs to regulate a herd. Under certain circumstances, some information must be obtained by alternate methods. Such is the case with these canine teeth! While the lower jaw is preferred, for examination, to reveal the age of an elk, it is frequently not available.

Deciduous upper canine teeth appear in elk calves about a month after birth. These teeth will be replaced later by larger, permanent teeth. These small temporary teeth are almost identical in size and shape in both male and female calves. They are quite small compared to permanent teeth——about 1/20 of the size of adult male and 1\10 the size of adult female permanent canines. The small deciduous teeth, retained for about a year, are replaced in June or July when the crowns of permanent canine teeth appear. Nearly a year is required for exposure of approximately half of the crown. Root extremities are the last part to develop and the tooth is completely formed between the second and third years.

The formation, development, and wear of these canine teeth are slightly more advanced in the females than in males. It is quite easy to recognize the characteristic size and shape between the male and female permanent canine teeth. Although these upper canine teeth do not have an opposing tooth to provide a wearing surface, they do reveal a great amount of wear. The surface wear of this lone tooth is due to contact with the tongue, as well as contact with the specialized muscle in the lower lip (distinguished by a circular patch of black hair).

Within a year after appearing through the gums, wear is noticeable on the canine tooth and continues throughout the animal's life. The complete crown is exposed in most elk 7 years-old or older. In elk over 15 years-old the root component often forms the wearing surface. Since development is in progress during the first and second year, the teeth are quite easy to distinguish. Many factors influence the variations found in individuals and canine teeth. Therefore, age designation after 3 years of age may vary by a year or two.

Unlike other members of the deer family, elk have a tooth on each side of their front upper jaw. These special teeth are located similarly to the upper fangs or canine teeth of dogs and are properly called "canine" teeth.

Standard terminology for biological measurements is in the metric system (25.4 millimeters is equivalent to 1 inch).

Sketches are of the inside or tongue side with the anterior or front edge to the left and posterior or rear edge to the right. Sectioned views are through the center of tooth.

The cemento-enamel junction (CEJ) is a point of distinction between the anatomical root (CEMENTUM) and crown (ENAMEL). In upper canine teeth of elk, this particular area is not readily distinguished.

An extensive collection of lower jaws and upper canine teeth was available during studies of the Northern Yellowstone elk herd. Lower jaws provided the primary basis of age for over 1,000 male and 1,500 female canine teeth, which were examined at the Wildlife Lab in Bozeman.

Advice for residents and nonresidents on finding where to hunt, obtaining reliable information, and negotiating the licensing and permitting process.

Elk are managed as a game species in Montana.

Where to Hunt Elk in Montana

An insider’s guide for new hunters and nonresidents to locating the best spots this season. 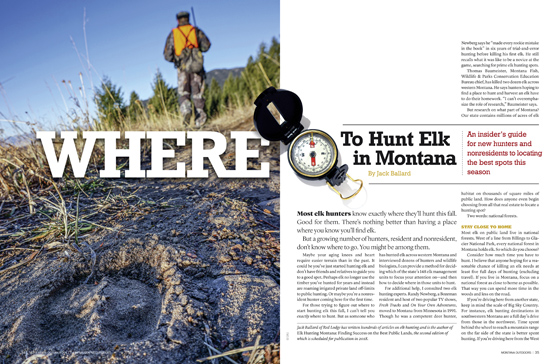